Today's review of the Doctor Strange in the Multiverse of Madness America Chavez Marvel Legend mentioned that she was pretty drastically reimagined between her first appearance and hitting it big.

Damn, that has to be one of the greatest redesigns in comic history. The original was, to put it charitably, "tacky"; there's a reason most people have no idea she used to look any different than she does today, and it's that, with her "'90s 'bad girl'" look, she was doomed to be almost immediately forgotten. Yes, the shield-shaped bustier ties her in with the original Miss America (the one from Wanda and Pietro Maximoff's origin story), but aging her down and classing her up made for a better character.

The most telling fact about the superiority of the new design is this:

In 2016, Joe Casey and Nick Dragotta announced a new book coming from Image, All-America Comix, about a Latina superhero who was fast, strong, could fly, and could open portals to different dimensions - and her name was America Vasquez. It was clearly another Steve Englehart/Mantis situation, where a character's creator is just 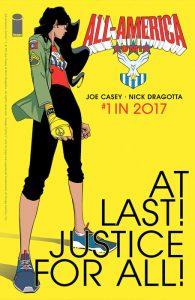 filing the numbers off and continuing to use them in the way they wanted (All-America Comix was announced only after Marvel rejected Casey's pitch for an America Chavez solo series). In fact, the issue opens with a meta-textual commentary calling Marvel's Chavez a pale imitation of the real thing, before Vasquez goes off and has her own adventures. She's a much different character - no interdimensional origins, no weird space-parents - but her world is clearly written to be the 616 Marvel U, just now STBLDF because the book is being published by Image.

Anyway, it took until 2020 for the issue to finally be published, but even from the first solicits, America Vasquez looked nothing like the original version of America Chavez they were trying to reclaim, but rather like her reimagined version. Even her original creators knew their take on her wasn't her best!

This entry was posted in addendums, comics, commentary, Marvel and tagged Avengers. Bookmark the permalink.

5 Responses to The two Americas