The Aliens/TMNT crossover that never was

You've seen He-Man, you've seen Star Wars, but now how about the Xenomorphs?

In 1985, Palladium Books published the roleplaying game Teenage Mutant Ninja Turtles & Other Strangeness, one making them one of the first TMNT licensees.The game allowed players to pick their own animal and mutate them the way they chose, creating a surprisingly varied assortment of characters. Game sales were hurt by the cartoon series shifting the TMNT's public perception from "adult" to "childish," but the system remains fairly influential despite its obscure nature (one group of pre-made enemies, the Terror Bears, inspired the Dream Beavers in the 2012 cartoon; and after Palladium opted not to renew the license in 2000, one of the former supplements, "After the Bomb," was spun off into its own in-house campaign setting, complete with the extensive character-creation process intact).

The sourcebook was published with an original Eastman and Laird comic in the middle, "Don't Judge a Book...". This eight-page story saw the Turtles getting ready to go to a Halloween party when some thugs try to break into April O'Neil's apartment and they have to fight them off. In that story, Donatello was dressed up as the Alien: 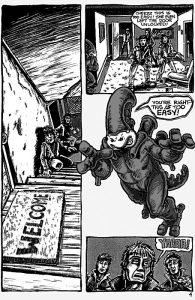 (And it was definitely THE Alien, because this was a year before the sequel came out.)

Clearly that story stuck with Ryan Brown, because in 1991 he pitched the xenomorphic "Alienator, the Extra-Terrestrial with a Hard-Shell Finish!" for Playmates' toyline. It was rejected, but he resubmitted twice, reminding them that Alien 3 was coming out soon and this would be a good way to cash in on the hype. Still no luck.

At Playmates, no one can hear you scream!

This entry was posted in cancelled toys, comics, Playmates and tagged Alien, TMNT. Bookmark the permalink.

2 Responses to The Aliens/TMNT crossover that never was