As mentioned in today's Storm Shadow review, Hasbro had plans for something new, until they decided to absorb the dumb complaints of a minority who fear change - after all, why do anything to draw in new fans when you can keep selling things reliably to the same dwindling pool of 40 customers you've had for decades?

The art on the website still shows the new design:

That's a bit over-done, but it's still clearly Storm Shadow, and clearly more than a larger version of a toy from 38 years ago.

The truly frustrating this is that we know the design could make for a good toy, because it actually is becoming one. Some company called "Hiya Toys" is licensing GI Joe from Hasbro and releasing 4" figures in the Asian market. And what did they base their Storm Shadow on? The real Classified design: 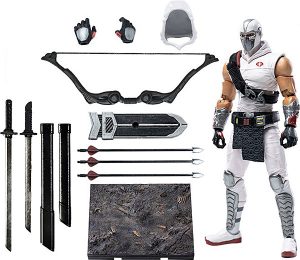 There have been a few changes, such as removing the Batman-blades on the forearms and the giant dragon tattoo, but they prove that the original design absolutely would have worked, and that running back to the '80s was an unnecessary choice.

This entry was posted in addendums, commentary, Hasbro and tagged GI Joe. Bookmark the permalink.