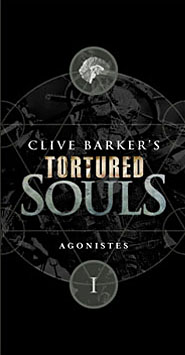 He is a transformer of human flesh; a creator of monsters. if a Supplicant comes to him with sufficient need, sufficient hunger for change--knowing how painful that will be--he will accomodate them. They become objects of perverse beauty beneath his hand; their bodies remade in fashions that they have no power to dictate.

Over the years, over the centuries, indeed, this extraordinary creature has gone by many names But we will call him by the first name he was ever given: Agonistes.

Where would a Supplicant find him? Usually in what he calls 'the burning places': deserts, for instance. But sometimes he can be found in 'the burning places' in our own inflamed cities: places where despair has seared away away all belief in hope and love.

There he moves, silently, irreproachably, his presence barely more than a rumour. And there he waits for those who need him to come to find him.

When a Supplicant presents him or herself there is never coercion. There is never violence, at least until the Supplicant has signed over his or her flesh. Then yes, there may be some second thoughts, once the work begins. The truth is that on many occasions a Supplicant has begged to die rather than continue to be 'empowered' by Agonistes. It hurts too much, they tell him, as his scalpels and his torches work their terrible surgery upon him. But in all the time he has been wandering the world Agonistes has only ever granted the comfort of death to one Supplicant who changed his mind. That man was Judas Iscariot, who whined so much Agonistes hanged him from a tree. The rest he works on despite their complaints, sometimes for days and nights, coming back to his labours when a piece of flesh has healed and he can begin on the next part of the surgery.

There are some minor compensations for all this pain, which Agonistes will sometimes offer his supplicants as he works. he will sing to them, for instance, and it is said that he knows every lullaby written, in every language of the world; songs of the cradle and the breast, to soothe the men and women he is remaking in the image of their terror.

And, if for some reason he feels particularly sympathetic to the Supplicant, Agonistes may even give his victim a piece of his own flesh to eat: just a sliver, cut with one of his finest scalpels, from the tender flesh of his upper thigh, or inner lip. According to legend, there is no food more comforting, more exquisite, tan the flesh of Agonistes. The merest sliver of it upon the tongue of the supplicant will make him or her forget all the horrors they are enduring, and deliver them to a place of paradisical calm.

Sometimes he will bring a mirror to show his Supplicants what he has so far created. Sometimes he will announce that he wants the results to be a surprise, and so the Supplicant is left to imagine, through the haze of pain, what Agonistes is turning them into.

It is an art, what Agonistes achieves.

he claims it is The First Art, this creation of new flesh, being the art that God used to call life into being. Agonistes believes in God; prays to him night and morning: thanking Him for making a world in which there is so much hopelessness and such a profound hunger for revenge that Supplicants will seek him out and beg him to reconfigure them in the image of their monstrous ideal.

And it appears that God apparently finds no offence in what Agonistes does, because for two and a half thousand years he has walked the planet, performing what he calls his holy art, and no harm has come to him. In fact he has prospered.

Some of the people who went under his knife, like Pontius Pilate, have aplace in our culture's history. Many are anonymous. he has transformed potentates and gangsters, failed actors and architects; women who'd been cheated by ther husbands and come seeking a new form to greet their adulterer in their marriage beds; school mistresses and perfumiers, dog-trainers and charcoal burners. The mighty and the insignificant, the noble and the peasent. As long as they are sincere Supplicants, and their prayers sound genuine, then Agonistes will be attentive to them.

Who is he, this Agonistes? This artist, this wanderer, this transformer of human flesh and bone?

In truth, nobody really knows. There is a heretical volume in the vatican Library called 'A Treatise on the madness of God', written by one Cardinal Gaillema in the mid-seventeenth century. In it, Gaillema argues that the account of the Creation of the world offered in the Book of Genesis is wrong in several particulars, one of which is relevant here: on the seventh day, the Cardinal argued, God did not rest. instead, driven into a kind of ecstatic fugue state by the labours of his Creation, God continued to work. But the creations He summoned up in His exhasted state where not the wholesome beats with which He had populated Eden. In one day and one night, wandering amongst the fresh glories of creation, he summoned up forms that defied all the beauty of his early work. Destroyers and demons, these were the antithesis of the wholesome forms that he had made in the first six days.

One of the creatures Jehovah created, the cardinal claims, was Agonistes. That's why agonistes can pray to His Father in heaven, and expect to be listened to. His is--at least according to the Cardinal Gaillema's account--one of God's own creations.

And there is no doubt that in his perverse way Agonistes serves a function. Over the years, over the centures, he has been the answer to countless prayers for deliverance from powerlessness.

The words may change from prayer to prayer, but the meat of them is always the same:

'O Agonistes, dark deliverer, make me in the image of my enemies' nightmares. Let my flesh be the stuff from which you carve their terrors; let my skull be a bell which sounds their death-knell. Give me a song to sing, which will be the song of their dispair, and let them wake and find me singing it at the bottom of their beds.

'Unmake me, unknit me, transform me.

'And if you cannot do that for me, Agonistes, then let me be excrement; let me be nothing; less than nothing.

'For I want to be the terror of my enemies, or I want oblivion. 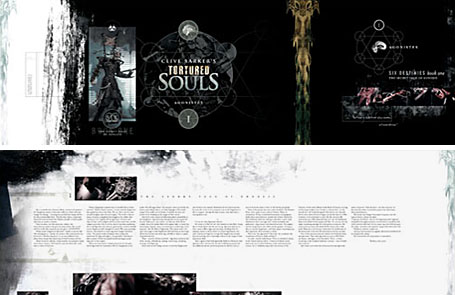