Tri-Klops addendum: The Guardians of Grayskull

In today's new review of Masters of the Universe Classics Tri-Klops, I (very) briefly mentioned the fact that the figure came with a human-size ring, and that the ring was an update of one from the '80s. All true, but it's only half the story.

Back when Val Staples and Emiliano Santalucia were doing their MotU comicbook, they created a detailed story bible that brought together elements from everywhere: the cartoons, the pack-in minicomics, the live-action film, everything. Last year, they talked to ToyFare about some of the things they had in mind - and one of the things had to do with that mysterious ring.

Staples and Santalucia wondered why King Randor, a guy who had an entire army at his disposal, needed the Masters around in the first place. They also wanted to explain why Man-At-Arms always seemed to know a lot about Grayskull.

The answer was their own creation: a secret society of warriors who kept the secrets of Grayskull after the original King Grayskull died. It was their duty to protect the power within the castle from being exploited by anyone, even the legitimate rulers of Eternia, until it was time for a new hero. So these guys, the Guardians of Grayskull, passed the duty down through the generations, and the ring was their symbol. Dekker, Man-At-Arms' predecessor, was a member, and passed it on to Duncan. And apparently Tri-Klops was a Guardian before turning bad. 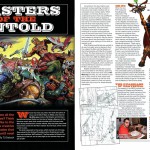 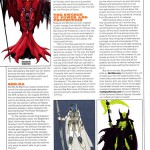 So the ring included with Tri-Klops is more than just "a gimmick." It's a sign that you deserve to know the truth about the power of Grayskull.

This entry was posted in addendums, Mattel and tagged MotU, ToyFare. Bookmark the permalink.

1 Response to Tri-Klops addendum: The Guardians of Grayskull