Rustin's Spoils of the Week #1 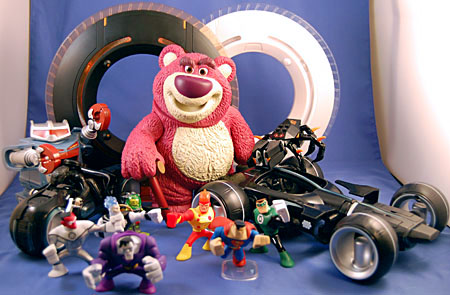 I'm going to try something new this year - a weekly roundup of what I've bought in the preceding week. This will be a bit different than the standard reviews you'll find here, they'll be briefer and more general. Being included on this list doesn't preclude any particular item from a "full" review by myself or another writer here, this is simply a way to get you fine readers as much toy-opinions as my hectic work schedule can allow. If variety is the spice of life, than this column could well be your Serrano chile. Likewise routine must by default be the blandness of life, so consider the weekly, Wednesday posting to be the dairy-based product washing away the terror of capsaicin from your poor, burned talk-holes. 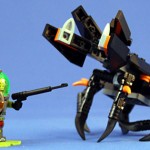 I have most of the Lego Atlantis line, but have avoided a lot of the "monster creatures" - the all-black look has just been a turn off. However for $4.88 on markdown I was happy to add this one to the collection, plus I don't think I have the Crab Ring. The mini-figure is nothing to write home about, but the crab is ultimately kinda cool. The pincer arms really need one more arm section/joint to make them more poseable, as is they just kind of look like spider mandibles. 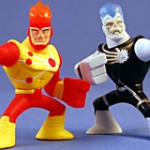 Such an awesome set. Translucent flames make it an instant sell for me, and add to that is a personal favorite character (design) and Green Lantern tie-in! Heck yes its awesome. A lot more sculpted detail than I expected, and the arms could work for both characters allowing for some useful redos in the future. This is surprisingly good set and a real promising start to the new line 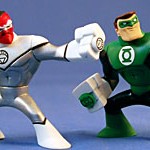 Another super easy sell, but seemed to be the hardest set of the line to find with clean paint. Hal's green doesn't quite match BATB's Guy Gardner's but that's survivable. Would have preferred a more colorful Sinestro, but its nice to get this one out of the way up front. I like the Action League blocky, mignola-esque style, but this new incarnation has larger hands than the BATB line, which bugs me more than I expected. 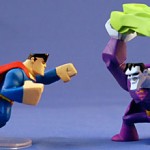 I've been obsessed with Bizarro ever since DC Direct's first figure of him so yet another easy sell for me. I really like the base for Superman which allows for a much better preposed sculpt than before. Bizarro is an equally awesome sculpt and one of my favorite Bizarro figures to date. He comes with a huge chunk of kryptonite. It'd be cool if it were cast in translucent green, but the paint does work fine and keeps it "in the style" of the line. 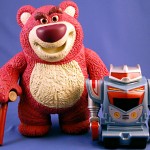 At $14.99 these two-packs feel much more reasonably priced than the individual $8-$10 figures. This one in particular is worth it for Lotso - he's not otherwise available and he's pretty darn big. 8" tall, and about 6" wide to be specific, he even comes with the rarest of all Mattel products - an accessory, his hammer/cane. Sparks, however makes up for the coolness of Lotso by being another figure so underwhelming one wonders they even made it, such is Mattel. Especially disappointing is no reference to his titular Sparks. At least the bead on his chest could have been orange... but it is Mattel after all. Both figures have three points of articulation - shoulders and neck. The set is definitely worth it for a very good figure of one of the best additions to the Toy Story universe, Lotso. 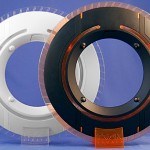 In spite of its flaws I really, really enjoy Tron 2, which translates into easy sales for Spin Master. They've released two more, not-so-easy to find, electronic Discs - one orange for Rinzler and one all White for Kevin Flynn. These make it a collection, which is pretty cool, so I jumped right on. Both are just as good as Sam's Blue Disc, but each has a flaw which makes them tougher sales - Flynn's all-white disk, while visually distinct, doesn't appear in the film a whole lot, and Rinzler's Disk uses White LED's rather than Orange (or another warm color) which kinda ruins the light-up effect by the color not being even through out. Overall I'm happy to add them to the collection - now we just desperately need a yellow Clu Disc! 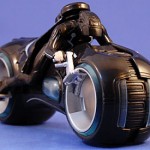 A better toy than I expected, but still not really worth $20. The turbine in the body of the bike spins as the front wheel turns, which is a cool feature. The Identity Disc cover on the back has a little push-down thing for no apparent reason. The also has the three braking flaps near the back, but they could really use some paint underneath to duplicate the look in the film. The figure is removable but has no points of articulation, save but for the head which is removable and can easily be swapped out for the regular Sam figure's head, which isn't film-accurate but looks much better on the figure. The sound effect is a little annoying, and I wish there was a way to get all of the lights to stay on uniformly longer. Of course, the bike's color is light blue, which was Sam's for a long time, but in the final movie he, and his bike, is definitively white. A re-release would be nice, because the blue one could easily be used to build up his cycle gang! 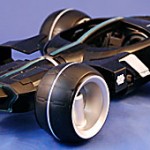 By far my least favorite vehicle for Tron Legacy, but fairly signature and, what the hell - I'm a slut. It's also a better toy than I expected. The light-up features are pretty solid and the figures fit comfortably inside, there's even recesses for their identity discs. The front portion can twist bout 20 degrees either way but more cool is that it does have the concealed missile launchers, though interestingly they don't fire anything. A welcome change from the norm of toydom. A missed missile launcher opportunity? Must make Hasbro ragingly uncomfortable.

This entry was posted in Lego, Mattel, Rustin's Spoils of the Week. Bookmark the permalink.