Rustin's Spoils of the Week #10

After all of the poor luck with locating the Holiday Season's exclusives at Walmart Yo turned me on to the Jabba's Playset still available on Walmart's website by which I then found the Green Lantern 5-pack. So with a little free shipping (FedEx locations count for the free "ship to store" option - sweet!) two very significant holes are filled. Then, Target continued to be the go-to Mattel destination by providing the other goodies you'll see below. 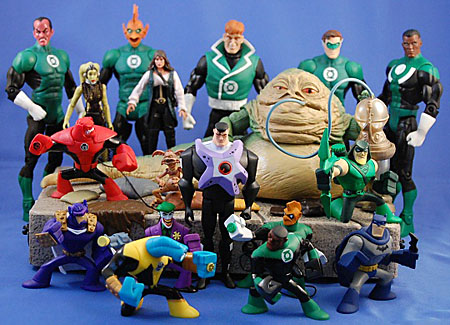 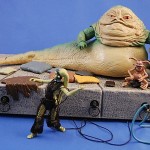 Ho boy have I been dying for this! I'm kinda surprised it came out as an exclusive, but whatever it takes to be released. Everything but the armrest/hookah and Salacious Crumb here is a new sculpt! All-new Jabba, all-new Oola, all-new throne and a shocking number of throw-pillows! This is really just a perfect centerpiece for the display and of the sculptural quality we have come to expect in the current iteration of the line. Now, all is not perfect, Jabba's body is hollow and rubber allow for some pointless tail articulation - pointless because it cause the rubber torso to warp excessively. Also, the arms, highly articulated though they are, just don't quite have the range one would like. And Salacious Crumb is the same as the one that came with eye-out C-3PO so the arms and legs are a bit wonky, but considering how much else is new with this set it's a-okay! If you collect Star Wars this is a Must Have! 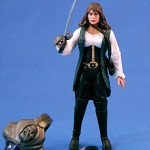 The fifth and final figure of Series 1 has the worst likeness of the batch. Clearly that's Penelope Cruz cause the figure has the same costume as the character in the film. Like Jack and Blackbeard her rubber hat fits on her head surprisingly well and, all things considered, she looks "natural" both with and without it on - a rarity in action figure-y. Also, these figures comes with scabbards that likewise look fine without sword and also hold the sword very well. Here black-light accessory is Jack’s ring cast in darker metallic plastic with a blue jewel - cost savings on Jakks' part or insight into significance for the film? 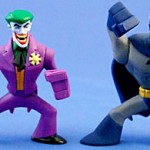 The balljointed shoulders promised at SDCC finally show up, and they're so tight they can barely be manipulated. It's a fine selling point for Batman, since we have an army of him already, though this design is more elongated to differentiate him from the Brave and the Bold iterations. Joker, though, is just a new head on the old body. This is a fairly pass-up-able set. 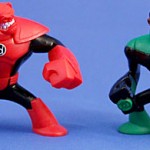 Atrocitus - what, what! I love me some Lanterns and this marks Mattel's first crack at the main Red one. He's a pretty good sculpt but something feels lost in the red plastic. The black on John's suit is painted in gloss, which is aesthetically nice, but the flat green doesn't look so hot next to it, nor do the rest of the Corps what also have flat black. 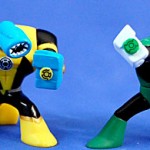 I really like Low and this is the figure that really sold me on the new Action League line. Of course, because he's cast in yellow plastic it's nearly impossible to find one with good paint. He also has a weird "smile" in his mouth I very much wish he lacked. Tomar is pretty cool and is essentially just what you'd expect. 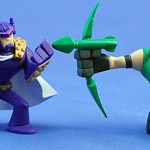 This is the forgettable pack of the series (which reminds me I never got Flash & Boomerang from Series 1). Green Arrow is neat but his pose is pretty derivative at this point (and its only Series 2!) and Prometheus... well I've never heard of him, but he does look kinda cool. 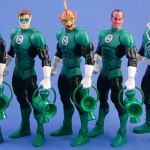 Mission Accomplished! Corps elaborated! Tomar Re and Guy Gardner are the new additions and welcome they are. John and Hal are repaints and not totally unwelcome, but at the same time not totally exciting. The fifth is GL Sinestro kit-bashing the Sinestro head onto the Hal body. It doesn't look as bad as I expected considering the scale issues, but is still a pointless figures as GL Sinestro always wore a raccoon mask. I understand that they cant spend a whole lot on these mutli-packs but come on. Tomar Re looked like a repainted Romat Ru head but is actually different, which is nice - but I can't help but think a repainted Romat head and a different character from Sinestro would have been a better use of money. Still though its really like Walmart had any substantial problem moving these sets. Guy is a decent figure, the new "torso" is just a rubber sleeve over the existing body, which is kind of a bummer. And that head... Like OMAC it just looks... off. Too stylized to fit in with the rest of the line. The paint is only okay across the board, with lots of white bleeding. 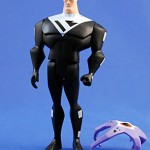 Such a cool figure that is greatly appreciated and goes wonderfully well with the Batman Beyond three pack that came out last year. As if the figure itself wasn't enough he also comes with an awesome Starro accessory. Starro is by far one of the best accessory in the JLU line, it captures incredibly well the famous Bruce Timm Style, and hey - it even has sculpted on suckers in the underside. Superman is a very welcome addition to the collection but he has two big flaws: like all figures his feet are sculpted up-angled which means standing is not his strong suit; moreover though, the neck terminated in a flat line, which does not take into account that the torso is at an angle, thus, Superman can never look directly forward, only done. I'm very happy to add this figure to the collection, and yeah yeah Neitlich kept the line along forever and ever but seriously... no wonder it's dying, the rest of the series consists of previously released figures and made-up costumes. Oh, and he cost $8.99 - two dollars more than the Action League. You know... maybe I won't miss JLU after all.

This entry was posted in Rustin's Spoils of the Week and tagged Batman, Green Lantern, JLU, PotC, Star Wars. Bookmark the permalink.

18 Responses to Rustin's Spoils of the Week #10