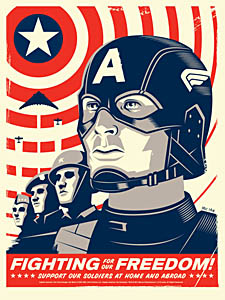 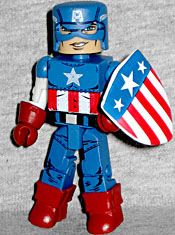 Now this is interesting - we know that Captain America's movie suit is a fancy padded thing, almost like the Ultimate Captain America costume - this, meanwhile, is almost the 616 costume, and other than the triangular shield, would fit into a current Avengers lineup - it's got the red gloves, the pirate boots, the feathery wings on the mask, the big stripes on the stomach, all that. Will he actually dress this "comicbooky" in the film? Maybe Steve Rogers' cover is that he travels around "playing" Captain America in USO shows. We'll find out Friday, I suppose.

This is Steve Rogers, by the way: the mask comes off, and there's hair you can replace it with - the same piece that all the other Captains America in Series 40 come with. It's a dirty blonde, parted on the left (does that mean he's a Republican or a Democrat?) and fits the head tightly. The face has some personality, too: a squint and a smirk. 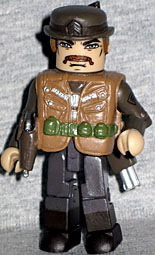 The second figure in this Toys Я Us exclusive two-pack would normally be the Howling Commandos' second-in-command, Dum Dum Dugan. We say "normally" because he usually serves under Nick Fury, but since the movies' Nick Fury clearly isn't a WWII vet, who knows what the status is? Maybe he answers to Tommy Lee Jones' character, or maybe he's in charge of the Howlers himself - again, we'll find out Friday! He's wearing a lot of brown; his arms, legs and trademark bowler are all the same color, and his vest is a lighter tan. The vest is a new mold with plenty of detail, including a holster on the belt for his silver revolver, and one on the back for his shotgun.

Dum Dum is played by Neal McDonough, who's been in enough movies that you'd recognize him by sight, but not enough that you actually know his name. He's just "the sort-of blonde, sort of gray-haired guy with the freaky light eyes." Look him up. The Minimate doesn't look a ton like him, but around the eyes? Yeah, the likeness is there.

This is an unusual set - the Captain America isn't really "movie" styled at all, but Dum Dum is awesome. The odds of them ever making a comic-styled Dum Dum Dugan are pretty low, so if you want someone to pal around with the 616 Nick Fury, this set can't be beat.