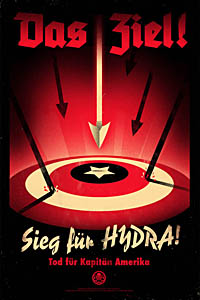 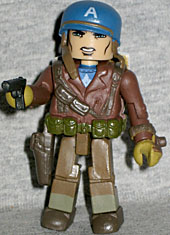 The Captain America Minimates don't have any bio information on the back of the packaging, but we can assume this is sort of an "undercover" Captain America: the Army didn't want everybody knowing Steve Rogers was the Sentinel of Liberty, so he was sent around the front lines dressed in a normal uniform. This isn't quite that, since he seems to just be wearing a heavy jacket over his Captain America shirt. He's sculpted with an ornate gun belt over the jacket, and has a new helmet, which sits (just a little too low, honestly) at an angle on his head.

Steve is carrying his triangular shield, just like "Golden Age" Cap had, and you can either plug it onto his back or the peg on his new left hand - the hand has a strap that goes up onto the forearm to complete the look. If you want to take his helmet off, the set includes a new dirty blonde hair piece. He's got an angry look on his face, but it's not really a likeness of Chris Evans. 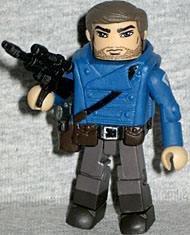 The movieverse take on Bucky is clearly inspired by his modern reimagining: this is a guy who will turn into the Winter Soldier, not a kid prancing around in tights - the fact that he's got more stubble than any of the soldiers should tell you that right away. He's wearing a blue jacket, the only real nod to his comic costume, and there's a wing painted on the left shoulder (it seems to be the insignia of the squad). Bucky's weapons include a pistol to fit in his belt holster (the same pistol Cap has) and a sniper rifle.

This set is the only way to get movie Bucky - he's not even getting a toy in the 4" line - and more than that, it's the only way to get the "undercover" Cap. It's always nice to see the main characters when Minimates tackle a license, but it's great when they make the toys that no one else will.