Seeing the new McFarlane "Twisted Land of Oz" toys got us thinking about American McGee's Oz, about which fairly little is known. We do, however, have some insights on his next project. 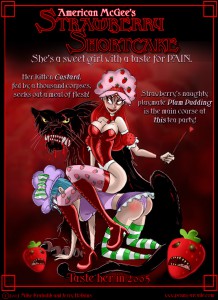 Then they got sued. Well, threatened to be sued, at any rate. American Greetings Corporation (yes, the greeting card people you go to in the unlikely event Hallmark doesn't have what you want) owns Strawberry Shortcake, and made them take the comic down, replacing it with the following disclaimer:

On the plus side, Penny Arcade got a second comic out of it.

Anyway, apparently American Greetings had never heard of the Streisand Effect: wherein any attempt to censor information leads, invariably, to more and more attention. If American Greetings had just ignored the comic, it would be forgotten today, just another joke in a huge archive of them; but by completely failing to understand how the internet works, they made the comic something famous. And thus, when I think of "American McGee" (as in the case of today's Minimate), that's what I think of...