We're spicing things up a bit this weekend with a bonus ".5" Spoils of the Week column! Why? How? Because! First up, we'll focus solely on the entire wave of Boy-Themed Fi?ures by Playmobil. This is a new range for the German company clearly taking the concept behind Lego's wildly successful Mini-Figure Collection and offering up similarly blind-bagged, deconstructed figures that can be added to any of your existing collections to help build out the fun.

Much like with the first series of Lego Mini-Figures these bagged figures have a printed code on the back of the package which corresponds to the figure inside. I've seen several lists around the internet but they were not accurate to what I was finding at Toys Я Us, so I jotted down the codes I found (except for a couple I forgot to note), hopefully they'll work for you too! 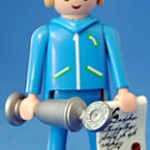 This is a fun little guy for the Life in the City range. Basically it's just a guy in an athletic sweatsuit that's more-or-less as legally close to Adidas as possible. He comes with two accessories, a trophy and a... declaration? I must admit exceptional confusion over what exactly this figure is supposed to be considering both of his accessories. The best answer I've come to I discovered on another blog which A/B'ed photos of this and Coach Sue Sylvester from Television's hit show Glee exhibiting a likeness so uncanny I purchased one of these as a gift for a so-called "GleeK" friend of mine. While I would have preferred a costume more clearly defined the accessories are definitely of use and this can happily be another member of the City populace. 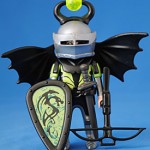 This is my favorite of the "Knights with Wings" figures they've been running with. The green and black play well off of each other and do a good job of serious-ing up this design. I've never really understood the purpose of the Horn-Orb, but fortunately it's removable. The helmet's visor and both wings are poseable and, including the helmet, he's got four accessories (crossbow, shield, sword) which makes him one of the better deals of the wave. Construction is a bit tricky considering both a belt and shoulder armor, but ultimately he's goes together in the same order as the rest of the figures. 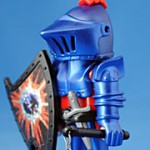 The Blue Knight is basically the icon for this series and he actually kind of lives up to the spotlight. I'm a sucker for metallic blue and that is his dominant color so he wins on that front. The red shirt, arms, and helmet crest help to accent the color and I really like this style of "pointed" helmet. The success of Playmobil, for me, has always been it's realism so highly colorful costumes like this really bug me - it's just an awkward place between history and fantasy. Ultimately he wins out and I quite like him, but I don't know where in the collection he'll go. Also, be careful while opening the packages. The icon on his shield is a sticker which I cut while scissoring the pack open. 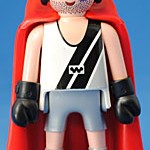 The Boxer is probably the most "we're copying Lego" figure of the set, but that may just be because Lego put out a boxer mini-figure in their fifth series which happened to hit shelves at the same time (same day, in fact, at my local Toys Я Us). Fortunately, Playmobil wins this one comparing the two figures as this one comes with more and just has a better overall look to him, very "Adrieeennneee!" The gloves clip on over the hands, as one might expect, but be ye wary - the one I got came with two left gloves! This is the kind of figure I wish the line had more of. New, cool, and fun. 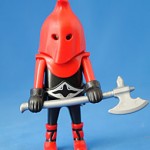 And this is the kind of figure I wish the line had less of. I know it's commendable that they'd even release a toy of an executioner in today's day and age, but I already have the original Specials release (#4524) and it was red too! I'm sure black isn't an option as it'd be too obvious and controversial, and white or tan is probably worse, but red? Again? I don't know, folks, this is just the kind of figure I look at and keep seeing a hundred different things I would have done with it instead (and all favoring the history side rather than the fantasy). Still though, if you missed out on that first one this is a must-have addition to your collection - no Castle is complete without him! 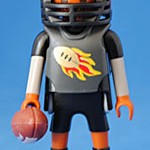 Ugh, gross. What am I looking at here? It's basically just a repaint of Specials #4635 and more importantly an incredibly lackluster one. I honestly got this guy just to complete the set and since TRU was having one of their 20% off Playmobil sales that day. The helmet and football are cool accessories but... it's just a boring costume. No two ways about it. Is he a player, or at practice, or so just some drunk kid at a party? We may never know. 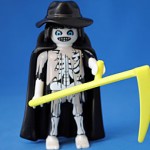 The most interesting figure of the series shows both what the line could/should be and why Playmobil is going to shoot themselves in the foot with it. Playmo-Death? Must Have! An odd Scarecrow-ish take on him? Well... sure, ok, yeah that could be kind of cool. Neon Yellow Scythe? ...are you kidding me?! The scythe is one of the harder to get accessories anyway and this figure would have been worth it just for that, but now...? I mean, really - in what context would you ever want that on display? Yet, taking a deep breath and rolling with it the need of a Grim Reaper outweighs the execution (Pun? Reader's discretion). And that's why I have two of this guy. 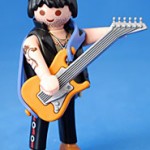 Oh hi, Lego. I didn't buy into any of the Lego Mini-figures with instruments which is kind of a bummer because it's sort of clear they're building a band so I won't miss that opportunity with this line. I don't have a Playmo-guitar so that's almost worth it enough but this figure does a good job of capturing that realism I prefer in my collection and I look forward to adding more to his lineup. The guitar has both a rubber strap and a triangle wedge behind the head which can be held by the figure, a nice touch. 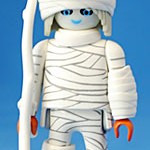 Oh my god - now, seriously... what is this? I hate this figure so much I'd leave it at that but the blog format demands more text to wrap around the photo, so here goes. They call this figure a "Mummy" but it's clearly a horribly injured and bandaged patient. And just to make sure you can't use him anywhere in your collection they gave him a white face but brown hands and feet. Oh, and a white stick. Yeah. See, this is exactly why Playmobil is struggling and got the boot from Target's shelves. What are they thinking here? Who would possibly want this!? ...Oh - hardcore completists with a review blog like myself. GROAN 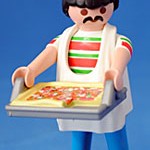 This is one of the figures I got pretty excited for because, to the best of my knowledge, they haven't done anything like him before, AND he comes with pizza! Sadly, though, the pizza is not only square in shape, it isn't removable from the pan. Unlike what Lego is doing, I'm fairly certain that Playmobil isn't creating any new pieces, just repainting existing stuff, so there you go. Also, unlike Lego, which normally includes one or two accessories, these tend to have a handful - for instance the chef's pizza pan, hat, shoes and apron. I was surprised to see that the apron's strap wraps all the around, I was expecting it to be a clip-on but it needs to be attached before the head is inserted. 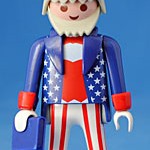 This is easily the most surprising of the entire 24 figure initial series of Fi?ures. Not only does it not really fit into any established theme it's a very specifically American character and Playmobil is a German company. Is Uncle Sam even well known outside of the States? It's an incredibly simple figure and feels very retro, with the spiky hair, beard and detail-less tophat. I do wish the hat came with a red or blue band to breakup the blandness, but what are you going to do? It's a cool and interesting figure and one that I hope bodes for a continuing theme in this line of one or more Holiday characters per wave. 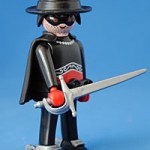 Just like Uncle Sam this is a cool and surprising figure for the series. So many of the figures seem to consciously not be anything familiar so it's interesting that these two go the exact opposite direction. Hopefully this is something Playmobil will learn from Lego as a great hook for attention and buy-in! He's a cool figure too, though simple. I don't think I had the spurs before and they're pretty cool little clip-on pieces. Zorro is a cool choice too because he could be either the Character for your Western scene (please bring back the Western theme!) or a guy at a City costume party.

This entry was posted in Playmobil, Rustin's Spoils of the Week, TRU. Bookmark the permalink.