Several weeks we looked at the Boy-Themed half Playmobil's Fi?ures Series 1 and now we'll examine the Girl-Themed set of Fi?ures. This is a new range for the German company clearly taking the concept behind Lego's wildly successful Mini-Figure Collection and offering up similarly blind-bagged, deconstructed figures that can be added to any of your existing collections to help build out the fun. 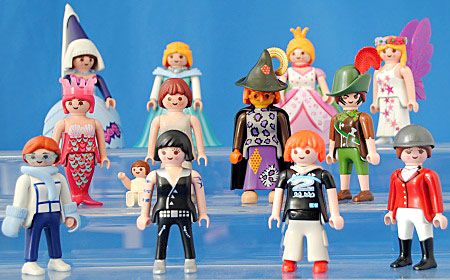 Much like with the first series of Lego Mini-Figures these figures come in bags, blue for boys and pink for girls. They have a printed code on the back of the package which corresponds to the figure inside. I've seen several lists around the internet but they were not accurate to what I was finding at Toys Я Us, so I jotted down the codes I found, hopefully they'll work for you too! 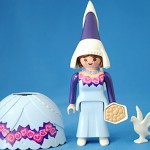 I'm a huge fan of the Castle theme and it's just never worked out that I got a "fancy dress" princess, so I'm quite happy to have this one. Plus her conical hat and bag 'o' birdseed make her great diorama material for strolling around a castle. I'm not crazy about the rose patterns, as they place the dress in a sort of odd middle ground between casual and formal to me but as a stand alone piece I think this is probably the best of the series. A good, unique look and plenty of accessories for some nice fun. 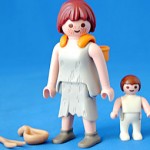 This year Playmobil launched a new Prehistoric theme with some really cool Caveman sets and this figure ties directly into that using some of the new tooling (i.e. dress with sculpted in fur detailing) while dipping into the vintage pool and bringing back out a slew of cooking materials, baby backpack and baby - all of which have been around since the '80s. It obviously goes without saying that this is by far the best value of the entire first series of 24 figures. She's practically worth getting for the baby alone not to mention the cooking utensils. This is the first Playmo-baby and baby-carrier I've had and I'm a little bummed that with the baby in the carrier the figure gets too back heavy to remain standing. The baby is a pretty cool little figure, with four points of articulation and it holds up surprisingly well for being about 30 years old! This is the first of the Prehistoric theme to show Stateside and its a pretty cool introduction. I like the new dress, it's the perfect median behind the detail I expect of modern toys and the simplicity I love about Playmobil. Much like the Cavepeople Lego put out, I hope this runs as a sort of sub-theme and we get one Caveperson per wave. 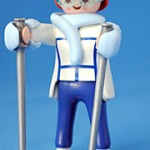 Aaaand this is how you can tell these come from a European company. I figured this was just a skier sans skis until doing a little research. I know people do this kind of thing in the US but certainly not enough for it to be readily recognizable - let alone worthy of a toy. To makes things more disappointing this exact figure, sans poles, is available in other set coming soon. She's fine "world building" fodder for your City display but I'm hard pressed to think of any real need or use for her.

She's a really plain figure, but is fun for the uniqueness of her. Well, at least she would be unique were there not a whole Show Rider theme released overseas this year. Ignoring that line, this is the kind of figure that the line is perfect for - visually interesting and quirky. Just a fun addition to the collection. 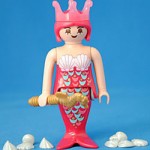 I love aquatic anything and though it's hyper-feminine, I have totally jumped on board with the mermaid pseudo-theme over the past couple years so I'm happy to continue plus-ing it out. This is a fun figure and again a perfect example of a great one-off piece for this line - cool on it's own but adds to existing theme(s). She comes with a cavalcade of little shells, which moms will want to be careful with as they are easily swallowed and highly loseable! The only drawback to this figure is the overwhelming dominance of pink. I'm sure they're afraid of Disney's lawyers, but they really need to start doing green-tailed mermaids. I think it'd also be incredibly cool to get some cool warrior or guard Mermen in the Boys line! 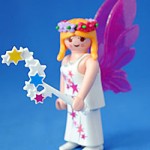 I haven't gotten any of the fairies before so was kind of looking forward to this but ultimately it was the most disappointing figure in the set. Her color pattern is not only familiar to past releases but is also available in another set coming soon. Still though, while I would have preferred something more colorful or creative looking, overall this is a fine figure that really only has one significant problem - the wings. As a result of the mold both wings stick straight back making them visible only in profile. It's essentially a deal-breaker for me as this character's main feature is hidden from view at most angles. 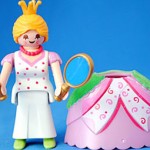 Much like the Bird Princess I was quite looking forward to this figure for the big ballgown dress and the hair-mounted crown (it's a separate gold piece that plugs into the hair). However, also like the other princess, the dress pattern leaves me a bit befuddled. Polka dots? Really? She comes with a red necklace, a brush and a hand mirror too which are fun and welcome additions though not crucial pieces. Several of these figures come with little sticker sheets with some "diamonds" on them so that you can bedazzle the figure as you see fit. As I'm generally anti-sticker I avoided that element and have thus forgotten which figure came with which sparkles. However, this one came with fuzzy green stickers to "plus" the dresses ornamentation. Since they were substantive additions I went for it, but boy was that a mistake! The fuzzy green is pretty tacky and renders this more of a Halloween costume than an actual princess. Worse yet is that the sticker sheet came partially folded in the package meaning the actual stickers are warped and the corners keep peeling up. It's a fun figure, but steer clear of the stickers! 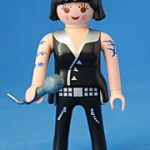 This is easily the least interesting figure of this series (perhaps of both initial waves) as there is little-to-no color on her leaving a bland appearance. Add to that a single accessory and this just feels like a ripoff as compared to the princess figures or cavewoman. Much like the guitarist in the Boys wave she is worth getting because the message here is they're building a band, so that complete set will be cool but in the interim she's fairly forgettable. This is one of the figures that comes with the bedazzler sheet, which I recall because it seems so unlikely for this character. 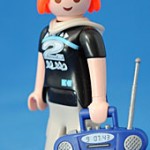 Despite not being historical, the Skater Girl was one of the more anticipated figures for me as it lives up to the "Playmo-Realism" that attracts me so. I call her a skater because that's very much what she looks like to though she includes no board. Alternately she has a little portable stereo (long like the '90s!) which is more intricate and impressive than I expected. I really dig this figure a lot, it just aesthetically comes together nicely, but like all good things in Fi?ures that perfection is spoiled by but one thing - in this case, her hair. The problem is that rather than being a redhead or "ginger" as suggested in photography, the hair is a near-blindingly bright neon orange. It's just terrible! But I suppose that's one of the perks of Playmobil - you can swap that out for something less painful to the eyes. 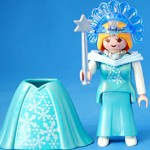 Due to the wand my initial suspicion was that this was Pinocchio's Blue Fairy, but the lack of wings and snowflake patterns prove me wrong. Without a doubt this is the best of the entire series. I just have no complaints here, she just comes together so well. The necklace and collar-sash-thing are actually one piece that fit over the shoulders before the head is plugged in and between it and the different-than-the-princesses gown gives her a much more elegant look than the other figures. I'm not sure where in the collection she'll go but she looks so great she definitely has a permanent place in it. 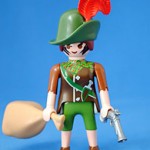 This is one figure that clearly fits in my beloved Castle theme and thus was my most anticipated Girls figure. Sadly, in execution she flounders more than flies. The ragged sleeves are a great touch as are the pistol and sack accessories. The Capri pants (shants?) and blackened cheeks are odd but acceptable, but the giant hat and painted-on bandolier and scarf greatly lessen this figure. I can understand that that have no bandolier contoured to the female torso (so make one!) but painting the scarf on... that's just cheap. She really could use the bulk on the shoulders and neck, and when you compare to the adornment on the other figures it's a very conspicuous choice. Still though, as a figure of a highway-woman this is a pretty unique character and worth having for that alone. 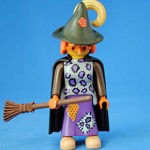 I don't have a witch so am fairly happy to have this one. She comes with a hat, gold feather, cape, broom and two clogs/slippers. She also features the glasses/hook-nose combo which has always struck me as one of those novelty Groucho glasses/nose combo things and really saps the realism of the thing to me. While I believe this is a unique new deco the overall color palate is pretty familiar and I would have preferred something a bit more fanciful - maybe even black dress/green skin like the Lego mini-fig. I do like the patch work shirt and dress though and what medieval diorama is complete without an old hag witching away the night?