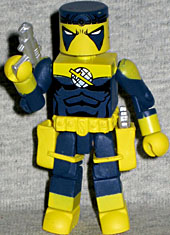 This figure shows why it's so important to put bios on the back of the packaging: I'm a huge comic nerd, and even I wouldn't know who this guy was if the box hadn't told me. He's certainly not dressed like a spy. He's wearing a bright a costume that's bright yellow and dark blue, meaning he can't blend in anywhere. He has a yellow utility belt with a large S on the buckle, and two holsters with silver pistols. There's paint detailing on his chest and back, but it's very hard to see, due to the dark colors. Strangely, he has ears painted on the sides of his head, and if you're wondering what that total freaking mess on his forehead is, he apparently had some kind of gun mounted there. Yeah, dumb.

Designed by Tony Stark to deal with more serious threats, the War Machine 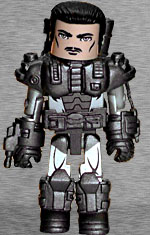 "Mark I War Machine" was the standard figure paired with Spymaster; and I didn't buy him, because he's Tony Stark. Yeah, the guy built the armor, but he only wore it for about half a minute before handing it off, so he didn't seem worth the money - especially since he came with a freaking nobody like Spymaster. I didn't look close enough to notice all the differences in the armor (the unique chest cap, the boots and one glove); all I saw was Tony Stark's head on the War Machine armor and left it on the shelf. It was later re-released in the third series of TRU Minimates, giving everyone a second chance. 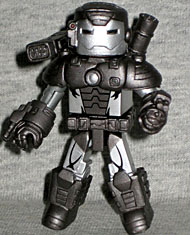 When Series 23 was solicited, none of us were expecting Rhodey to be the chase variant - that's stupid! It was only when they hit stores that we learned the awful truth: if you want the more familiar character, you have to buy the rare set. The armor is very blocky, as it should be. The helmet, chest cap, belt, gloves and boots are new pieces, designed to bulk up the body, but some of the costume details are still simply painted on, because Minimates hadn't started going crazy with the molded pieces yet. He's dark grey and silver, with a little bit of black detailing for muscles and outlines. 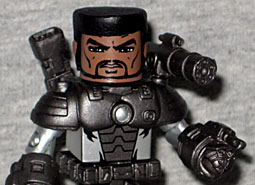 War Machine gets his heavy armaments: a missile launcher on the right shoulder and a Gatling gun on the left. Since the Minimate can't have them slide up into position, they're made mobile by use of pegs and holes on the top and back of the shoulder. The helmet is removable, but since you can't have him running around bald, he gets hair to replace it. This figure is based on Rhodey's appearance in the early '90s, so like Burton Guster, he has a hi-top fade.

All Minimates share the same body with different paint decos, and they all move at the same 14 points: neck, waist, shoulders, elbows, wrists, hips, knees and ankles. That's a heckuva lot of motion for something so tiny. The simple style also means that Art Asylum can crank out characters faster than any other company - it's not like ToyBiz or Hasbro have made Spy Smasher Spymaster, you know? Art Asylum really messed this one up by making the wrong figure the variant, but Rhodey is good if you can get him. Don't buy both sets, because nobody needs more than one Spymaster.