Rustin's Spoils of the Week #59

Rustin doesn't have super powers. But what he does have is the ability to review any collectible, no matter how small or trivial. That's all he does, but he does it better than anyone else in the history of the world. Even without the uncanny powers of his superhuman peers, he remains one of the most dangerous men on the face of the Earth. 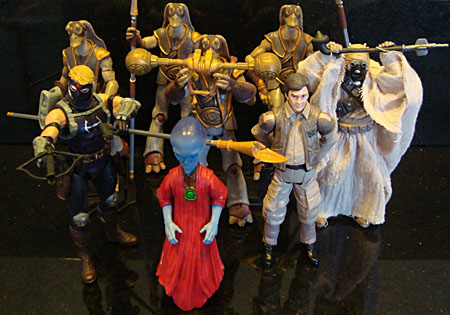 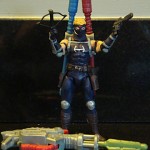 I had to go to South Carolina to finally find this guy! Suffice to say I'm no fan of the costume but am a fan of the Ultimates and of new figures. He falls much in line with the rest of the series (we need wrists and ankle joints, Hasbro!) and I particularly like his bow-gun. However, the more remarkable thing is his cardback bio, which I now reprint for you in its brilliance and entirety: Clint Barton doesn't have super powers. But what he does have is the ability to hit any target, no matter how small or distant. That's all he does, but he does it better than anyone else in the history of the world. Even without the uncanny powers of his superhuman peers, he remains one of the most dangerous men on the face of the Earth. 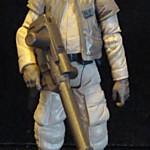 I found this guy, the least exciting (at least to me) of the final pre-Phantom Menace Vintage figures at Walmart so now I get to look at him and be angry that I don't have the others. I had no idea who this was until I friend pointed out he's one of the "I'll push buttons in the back seat" guys behind General Lando in the Falcon cockpit (I have not seen him as I have yet to shell out the big bucks to Uncle Lucas). Superb. The best part is that he is pretty off-model from the gentleman pictured on the cardback, who sports a collarless shirt, a low neckline on his overshirt-shirt and a notably different face. At least he gets a big ugly gun. You know, I'm being harsh. I do love character depth more than just about anything else so I am pretty excited to get a "sat in the background" guy actually. I'm just not too thrilled by the scene he comes from and more importantly, if you're going to go this deep and specific you have a much thinner margin of error as I know there will never be another Col. Cracken figure - so... do it right or don't do it all, please. 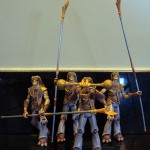 Hahaha, I told you I'd buy more, and thus it is that I have! Now with a total of five I think I will have to call it quits (at least until these get reissued and put on sale). What can be said that I have not already writ? Not much, really... just a solid armybuilder. I do think they would have been better served including a new energy shield as opposed to the mega binoculars. You really only need one pair of those and a more generic accessory would really help the armybuild-ability of the figure. Still a hoot, though, and worth your time should the fancy tickle you. 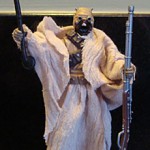 A reissue of the "old" Vintage figure, and it is a good toy at that. Lots of great sculptural detailing and I think this release's softgoods (Bane of the Rustin) look and function much better than previously. Sadly this is the T-Crotch version, not the balljointed hips one that came with the Bantha. After reading League of Extraordinary Gentlemen Volume II, Issue 1, I truly beheld the genius of this design and lament it couldn't have been used more and in some more Horde-ish like threat. Further proof that A New Hope is the best of all Star Wars in that it could offer a design so excellent for so key but fleeting action. Yet, I do feel this figure's tan is a bit too light. Regardless Sand People are da bomb and worth picking up. 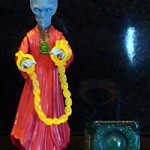 Stumbled upon this Gaurdian in a Walmart clearance aisle and decided to pick him up because I didn't know he actually saw release and because I have the first three Gaurdians from the Walmart two-packs. ...OH! And he was marked down to $1.50, which is a fair value for these. It's the same, "meh" figure as the two-packs, with good sculpting but only three swivel joints (neck and shoulders). He comes with a "one size fits no-one" ring and translucent yellow shackles. What was the logic there? He tried to use Yellow Fear Energy so that's what they bound him in? Whatever - that "film" is best forgotten. 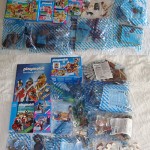 Thanks to a mighty coalescence of modern industry, locational proximity, abject desire and twinkling giggle of fate I have ticked yet more more Life-Long Ambition off Unresolved Items for the Perpetuation of Existence - a visit to the mighty Playmobil Fun Park of West Palm Beach, Florida, U.S.A. Above you see pictured the resultant two-wave epic haul. Without time or ability of late I can not provide to thee reviews presently, but I would be fully remiss in my duties to not, at the least, acknowledge the full Spoils of the Week. Thus, reader, you may expect that in due course, and, O Haters, you fully have that with that which to look forward. (Funpark Haul - Part 1) (Funpark Haul - Part 2)

This entry was posted in Hasbro, Mattel, Playmobil, Rustin's Spoils of the Week and tagged Avengers, Green Lantern, Star Wars. Bookmark the permalink.

20 Responses to Rustin's Spoils of the Week #59