Rustin's Spoils of the Week #60 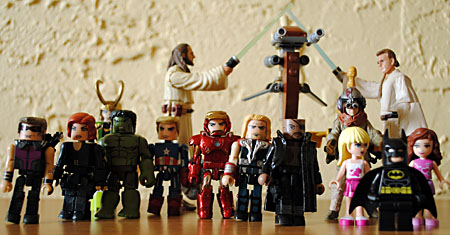 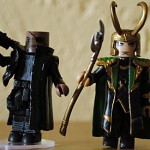 Both of these folks have received Minimates in the past, and both are wearing similar enough costumes that they could have just been re-released however each has significant new pieces. Fury gets a new coat, in shiny black, with the right side "pulled back" to reveal the gun holster (which easily holds his handgun). It's a nice idea, but is such a specific, "pre-posed" conceit I feel it limits the figure somewhat (though I could see the coat being successfully re-used for Pirates with access to a sword/scabbard). He also comes with a bazooka from that one scene where the character actually does something. Loki gets an all new helmet, torso cover and spear/scepter accessory. All are well sculpted and film accurate. This is one of the two Toys R Us exclusive sets and is certainly a must-have though, to be honest, it feels a little lackluster. 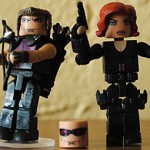 This is the other Toys R Us exclusive set and completes the Avengers lineup (though it too is somehow a little un-exciting... perhaps the costumes are visually too similar/dominated by black). Black Widow is, like the previous set, a familiar figure having had a 'mate in the Iron Man 2 series. She comes with two guns and two hip-holsters, which fit the guns very well. Hawkeye comes loaded with new pieces. His shoulder/quiver piece has sculpted on arrows as well as a slot for the three loose arrows he comes with. The Bow has a little clip for the arrows to fit in, but they are so tiny it's hard to keep them in place. He also gets an alternate head for "Sunglasses Off" face with light blue irises. It's very excellent that they cover both looks but it seems like overkill to have two separate heads - this is a perfect example of where the "Lego approach" of 2-faces-1-head would have worked well. 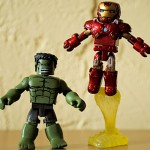 Hulk absolutely stole the movie. I was shocked by how great Ruffalo was and he (with writer/director Joss Whedon) proved unequivocally that Banner/Hulk actually is an interesting, worthwhile character - now, if only they can figure out how to turn that into its own stand alone film... This one uses a lot of the pieces from the recent Hulk Minimates but with new open hands. He gets an alternate head with "closed mouth" expression. Iron Man comes with all the standard accessories for the Movie Iron Man 'mates - a flight stand, closed helmet, open helmet and hair piece. It's another great figure, but the Mark VII armor is close the to Mark IV and Mark VI so the differences are a little too subtle to really pop out at you. However, this guy gets the new "shoulder/chest armor only" approach we've seen starting with the MvC 3 Iron Man, and I think that it's a very strong aesthetic improvement! 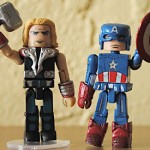 To date this is the only available sleeve-less Thor figure from Avengers and I'm quite pleased for it, since it is his most common look in the film. He gets a new shoulder/chest piece which is a nice way to add some detail/dynamism to the figure, though the chest portion was warped to the side on every figure I saw. Cap comes with new gloves, boots and helmet (but the same shield as from the previous film, as he should) that help recreate his new look. He also gets an alternate hairpiece, so it's really a bummer there isn't an alternate look available for Thor which would justify double-dipping and getting a second of this set. I'll also note that each set, save but for Hulk/Iron Man, comes with a clear circular stand. I don't have my MvC3 figures on hand so I'll refer to these as "v3" stands, as they are the smaller size of v2 but actually fit the figures' pegholes as with v1. SELL US BAGS OF THESE!!! 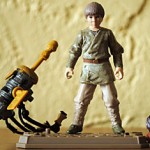 I applaud Hasbro for introducing new figures into their "Movie Heroes" line so that it's not just peg-warming re-issues. However, these new figures are very hard to find as they sell-through much faster. Plus, they are under-articulated compared the "Vintage" line. I've been waiting for a new "Slave" Anakin for 13 years and this one is a good update, but is something I would have expected more from circa 2005. He's only articulated at the "Big 5" and seems to be under-detailed in sculpt. The likeness is better than the Padawan version in the "Vintage" line, but seeing as this is what Anakin wears for all but 60 seconds of The Phantom Menace it's fairly aggravating that this is the one that doesn't get the "Vintage" style articulation and sculpt. He does include his Pod Racer helmet and a cool jet-pack/missile-launcher in the style of his pod-racer. Still though, for $9 I expect more from Hasbro. 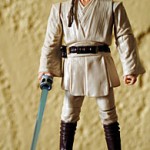 Much like Anakin this is an under-articulated figure with a better-than-the-Vintage-version likeness. Why buy it then? Well, he has a light-up lightsaber that was just too neat for me to pass up. The LED is very bright and the effect is quite excellent. Sadly, the only way to trigger it is by pressing in the belt buckle... lame. Plus there is no battery-port, etc., and thus no way to replace batteries or re-wire the figure to be "always on," which is what I think we'd all prefer. It's a great concept, but just favors the "for kids" end a little too much to be totally worth it. Still though, I'm hoping they do more figures with the Light-Up feature. 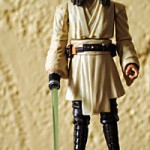 Same as Obi-Wan. Each figure gets a ball-and-socket head (though the joint is of different sizes than the "Vintage" versions so head-swaps take some effort), swivel shoulders (the right arm doesn't go much higher that the shoulder due to the wiring), balljointed left elbow, swivel left hand, T-crotch and balljointed knees. The more figures I get without ankle-articulation the more I realize its importance. I'd take ankle articulation over knee articulation any day. It adds much more flexibility to posing. The figures look like they have a waist joint, but in reality that's just a seam from the plastic skirt piece, which affixes via peg/hole on the right. I'm sure that will help them re-use the bulk of these figures for future light-up Jedi. 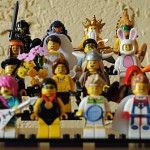 Series 7 officially launched on May 1st, and between the Lego Store and several Toys R Us' and Walmarts I was able to not only complete the set but also amass the semi-armies I was after (including six Mermen!). The highlights are certainly the Merman, the Space Soldier and the Aztec Warrior - each a potential battle-builder and with their own, massive, new piece. The Viking Woman is surprisingly cool, and will make a good addition to the medieval village with a hair-swap (same with Red Riding Hood). The Bunny Suit guy is possibly my favorite, though, as his hilarity is endless as ANY head-swap makes for endless variations of characters. My favorite variations so far are Angry-Old-Man face from the Merman and by far the murderous Black Knight's face - paired with Tarzan's knife he makes for a stellar serial killer! 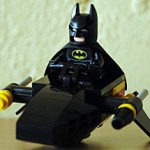 Woohoo, Batman polybag! If all you care about is getting the ol' B-Man mini-fig, here you go. The Jetski/mini-boat is neat, and with its rear fins a better design than I expected. However with just a flat end at the back it seems a little lackluster. It gets two of those smooth, rounded discs for the bottom for easy "swooshing" but those make it not rest evenly on a flat surface. It is what it is - nothing terribly special. But it is a neat, relatively cheap way, to get a Lego Batman. 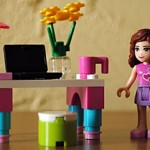 This is a "fun" one that actually works well with the other sets and includes some nice pieces in the new Friends colors. Plus it comes with a black laptop, an accessory that is always handy to have more of. The piece, though, that is most interesting and desirable to me is the flower Vase - it's a standard mini-fig head cast in transparent clear! I'm a little tempted to buy a handful of these sets to use those pieces on the upcoming Nazgul figures which, as I understand, come with black heads. 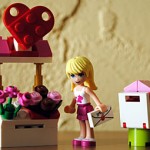 This is yet another simple, cute Friends set. It has a little Valentine's day kiosk from which one can steal flowers or chocolates. Plus, there is a mailbox for mailing love letters and such - which of course begs the question who are they mailing love letters to? I think the only male figure in the Friends line is the Dad from the house... Whatevs, some nice bricks to add to the catalog here, plus it satiates my lust for polybag sets. 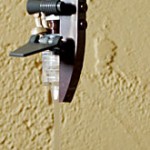 Wow! A Star Wars set that isn't a micro ship!? While I love those a whole heck of a lot it's very cool to see a minifigure and vehicle for a change, especially one that is both useful and a logical choice! It's a neat design but the build is surprisingly difficult. The issues arise when trying to get the studs in an even line to all plug into the brown curve-y piece of the body. It's clearly do-able, but with more effort that I anticipated, to be sure. I've picked up several of these sets and must fight my compulsive nature to keep from getting more. Not only are they great armybuilders, they also have those all-too-rare clear flight stands!

7 Responses to Rustin's Spoils of the Week #60