Book review: "Comic-Con and the Business of Pop Culture" 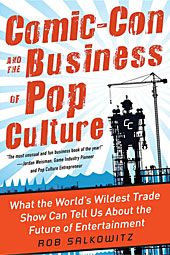 I can always tell when Comic-Con is near because my inbox starts filling up with floods of Press related emails. Usually these are generic "come to our booth" or "check out this indie film" press releases but every once in a while something of real interest comes through. Thus it was when a note for a new book came in with a title that immediately grabbed my attention: Comic-Con and the Business of Pop Culture. The fine folks at McGraw Hill were kind enough to provide us with a copy for review, so while we usually review toys and collectibles... "and now for something completely different."

COMIC-CON AND THE BUSINESS OF POP CULTURE: What the World's Wildest Trade Show Can Tell Us about the Future of Entertainment (McGraw-Hill Professional; HC, $27.00; June, 2012), by business writer Rob Salkowitz offers a rare glimpse inside this pop culture-lover's convergence of geekdom and big business. "The Con" is a swirling vortex of brands, empires, movie stars, and the undead - clever, crazily, competing for the attentions and spending power of an electrified fan base that meets at a crossroads of genres and interests. 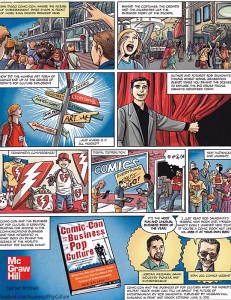 It's also become a window into the dramatically challenged comics empire. While the onset of digital publishing threatens its very existence, marketers across a wide swath of industries continue to page through the comics backlist for source material. The comics culture, grounded in nostalgia and continuity, is undergoing rapid changes driven by external forces that may render it completely unrecognizable in a short time.

Salkowitz is one of us. He's been into comics and even went to his first 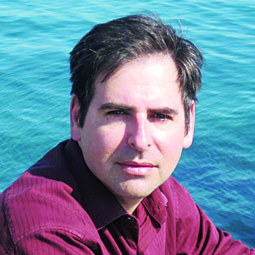 convention at age 8. His first "published text" was a fan letter to Will Eisner's The Spirit Magazine (which was surreptitiously published by then editor Denis Kitchen, who is now Liteary Agent to Salkowitz). He's been attending the San Diego Comic-Con annually since 1997 (which gives him one year on me, argh!) so he knows it pretty thoroughly and indeed has made some longterm "industry" friends and has even entered part of the Con's inner circle (he's part of the Eisner Awards ceremony crew). Add to that a professional career in Digital Media strategy, with two other books to his credit as well as teaching in the masters program at the University of Washington. Suffice to say, this is the guy to write this book, but what exactly is it?

Comic-Con and the Business of Pop-Culture is broken into seven chapters, each themed to a day or element of SDCC. For instance Chapter 1 dicusses the history of and prep for the Con under the auspices of booking hotel rooms. Chapter is Wednesday (aka Preview Night), then Thursday, Friday, Saturday, Sunday and finally "Just Wait Till Next Year" as Chapter 7, wherein he explores the possible futures in the industry. This is a reasonable gimmick for delineation (it's just barely over the line into "too cute" territory) but it also brings in what was, for me, the least enjoyable part of the book - it's essentially a travelogue for Salkowitz's time at SDCC 2011.

It's a bit of a surprise and frankly rubbed me the wrong way. It veers the book into a diary-like narrative not about the Con but about his Con. Salkowitz gets a soapbox upon which he extolls the virtues of his interests and winkingly ribs the other implicitly not-as-just passions at play within the Convention Hall. This varies between interesting and annoying based on the anecdote in play, but overall seemed not wholly appropriate for what purports to be an analysis of Comic-Con and the comics industry as a whole. Of course, I'm biased in that I've been going to SDCC for 15 years now so anything beyond the stories of his personal friends or exhibitor histories had little value to me as I have lived it first hand. The enjoyment and relevance might play differently to folks who have rarely or never attended the convention.

Based on the title I had hoped this might be a dissection of the evolution of SDCC, looking at how it turned from the fun gathering I first attended to the behemoth it is now (Salkowitz notes there were about 40,000 attendees his first year in '97 and an estimated 140,000 last year in 2011) but he is a Futurist by trade so the history is tangential with the focus being the present (via the pseudo travelogue) with an undercurrent of the future. Again the title misdirects because the discussion is not about pop culture but rather the comicbook industry - the heart of the Con. Thus, it's the bread-crumb trail through the first six chapters regarding the comic industry that was the most interesting and the book really takes off on Page 200 when the discussion leaves SDCC 2011 behind and focuses fully on comics - and it's a pretty hairy scene, my friends.

Most of the troubles being faced are old-hat to many of us - prices are rising, sales are declining. Comics are struggling hard to stay relevant in the modern digital era and despite the mainstream popularity of the characters there is still stigma attached to collectors and shops. The obvious thought, and debate, is over when and how comics will go digital, but Salkowitz excellently highlights the roadblocks: for instance, the industry is heavily invested in supporting local comicshops, which will undeniably collapse if distribution shifts predominantly to digital; what effect would that collapse then have on the industry?

Plus, there's the conundrum of digital file format. Each company uses a proprietary system, typically cloud-based, to prevent piracy. The implications of that are many-fold: if a company goes out of business, they won't allow file downloads, so you've just lost your collection; plus now "they" can go in and re-edit any comic they choose to after the fact; and there's no way to have one consolidated collection without a standard format like the .mp3 that can be shared across software. But if it can be shared, it can be pirated and that hurts and already wounded industry so you see it's a veritable Pandora's Box. 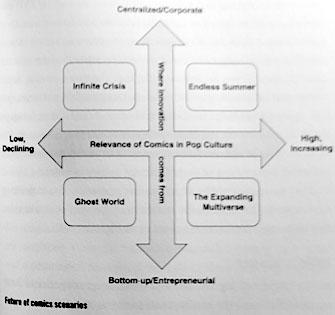 Ultimately Salkowitz outlines four broad outcomes for comics wherein the industry collapses into a niche art focus; rolls back to its '70s/'80s style of fringe success; gets coporately consolidated and drives big profits; or merges the art, the community and the internet into something new and great. All four scenarios are plausible but not necessarily likely and, indeed, only time can tell (my money is on a mix of the last two). But that's the fun of this book. Salkowitz does a stellar job of clarifying all of the elements in play and looking at the ways they could interconnect in the future. It's that element that is the most surprising piece of the book because despite my frustration with the early chapters the subject matter has gotten under my skin and I find myself thinking alot about the pitfalls and possibilites of the industry and how those can all move out to affect the rest of the world. For instance, at it's best, the local comicshops experience is a great, personal sales approach that is now starting to creep into other retails avenues as stores try to win back sales from online. Marvel has also adapted the "free digital download" feature becoming common to DVDs and Blu-rays for all of its books over $3.99 in price.

It's pretty exciting to know we're in the middle of the medium's evolution right now and because of that, Salkowitz was definitely up against a ticking clock to get his book out. At times it does feel a bit rushed or tangential (especially as he describes his "which panel will I see" moments) and he alludes to things that seem to require fuller discussion - for instance the foreign conventions that draw 25% to 350% (France's International Comics Festival and Japan's biannual Comiket, respectively) of CCI's audience - but overall he does a good job of presenting the present issues facing the comicbook industry and what possible routes it has for survival, or at least evolving to meet the modern world. As such it's an interesting read and worth it to anyone interested in Comics as a entity or even business theory. Those with a particular interest in what SDCC 2011 was like will also get the benefit of the firsthand account.

Comic-Con and the Business of Pop Culture: What the World's Wildest Trade Show Can Tell Us about the Future of Entertainment, by Rob Salkowitz, was published by McGraw-Hill Professional in June of 2012. It carries a retail price of $27.00 USD for both the Hardcover print and eBook editions.

1 Response to Book review: "Comic-Con and the Business of Pop Culture"