For the first time that I've noted Lego had a pretty solid presence at the convention beyond their booth, with at least three panels about Lego spread across the four days. One I wasn't able to make it to, another, which was the only official Lego panel, was for Ninjago (yawn) and then there was this, rooted in the most popular Lego magazine and about the AFOL community (Adult Fan Of Lego) so it was right up my alley.

The Lego fan community is about a decade old, and Joe defines that as building for other people, i.e. showing off what you build to others. Websites are big for community building and print media is growing too (magazine and books), and events are becoming more common and popular (one in Paris last week had 10,000 attendees in a town with a population of 3,000).

Brandon had been building since a young kid, but then got out of it for a bit. Star Wars Lego's launched when he was about 18 and it dragged him back in. He's "internet famous" for his ANH, ESB and ROTJ Chess sets and was part of the team who built the 7.5' tall Orthanc. Orthanc was segmented vertically so it can be disassembled and reassembled, it took seven months to build. There's a lot of trial and error when you're building on your own. He's also started a new trading card series called "Studs" that features AFOL builders - a MOC ("My Own Creation" - what AFOLs call a custom) on the front and info about the builder on the back. They'll be released in October.

Event Building is becoming popular and is usually Team Building (building as a team) for instance at charity events or at the Lego booth here at the Con. A French company had their employees do a team build of the company's new building to help get everyone excited and interested for the new space.

Elizabeth talks about a team build at a charity event for Mattie Miracle Cancer Foundation. It had three areas - one was a play area with used brick, the second was a train display, and the third had a team build of the Foundation's logo, which took about 4.5 hours to complete.

Jim talks a bit about Cuusoo and its communal nature as well the Rebrick website, and finally that the Lego Movie in 2014 is holding contests for different age groups to design cars that will be used in the film.

Nathan is a certified Lego builder and does this full-time. He does both art projects and commissions, including the life size models of Conan O'Brien and his Flaming C charter. He also built a Green Lantern and Superman models for some screenings in LA as well as a full-size Catwoman for the "We Can Be Heroes" charity DC has started and version of a spray-paint painting of Batman by Jim Lee on a brick wall entirely made out of Legos. All four of those builds were on display at the WCBH Gallery near the Convention Center. He's also collaborated with some filmmakers on a short film called Daddy Warblocks for which he built props and ended up becoming a producer on it as well; it's basically a modern retelling of Pinocchio but with Legos. Nathan's also teamed with Dean West for photos of every day life but incorporating Lego builds subtly in each. He met with President Clinton recently at an event supporting arts and education and while talking to Clinton a little boy came up and asked "could I take a photo with you" so Clinton said yes then the kid said "no, not you old man, the Lego guy."

Q&A
Advice on how to get your MOCs out to a bigger, broader audience? Online accounts for sharing, also attend conventions and take your MOCs to exhibit. Start a Flickr account, it's pretty much the number one MOC location online.

Insight on process of taking an idea to a finished project? For Nathan it starts with a lot of sketching, even on brick paper or Lego Digital Designer and of course trial and error builds. He also glues his models together, so if he makes a mistake he's got to chisel it apart. Brandon keeps a catalog of every part that exists so that he knows all the options and what would work best for what he's trying to achieve.

Did you guys make the Lego Star Wars display at Legoland? No, but two guys in the audience work at Legoland and had a part in it. 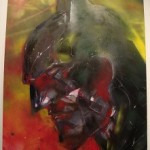 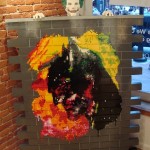 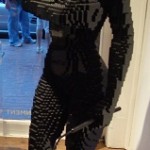 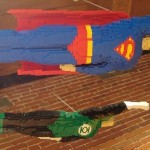 This entry was posted in DC, Lego, SDCC and tagged Batman, SDCC 2012. Bookmark the permalink.