This alternate costume was created by Spider-Man to counter the 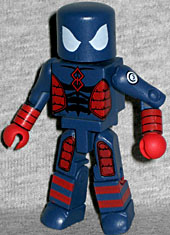 devastating electricity powers of the super-villain Electro. By utilizing non-conductive materials and building on his original "rubber air mattress" design, he defeated Electro with ease.

Yes, in Amazing Spider-Man #66, Spidey really did make a costume out of an air mattress. This version, however, is from ASM #425, the culmination of a tale in which Electro had his powers increased (and thus, why Spidey's normal tactics wouldn't work). The suit is red and blue, in traditional Spider-Man style, but but it isn't quite accurate to the version seen in the comics. Compare it to the Superhero Squad take on the suit, and you'll see the mistakes: the red padded sections on his ribs should continue around to his back; the red part of the sleeves should reach up to the biceps; and there should be silver details on the top/back of his head.

Halfway through the battle, Electro tore the new mask Spider-Man was wearing,

so he pulled the rest off and spent the rest of the brawl with just his normal mask. This figure allows you to do that, by virtue of making the blue mask a removable cap. The colors on the head beneath were specifically chosen to match the colors of Series 24 Classic Spider-Man, so if you don't like the "oversized" Spider-head on that figure you can put this one on to shrink it down. strangely, the white of the eyes isn't very solid, and you can see the webs of his mask behind them.

Given super-human powers by a freak electrical accident, Max Dillon was transformed from an average electric company lineman into the super-villain 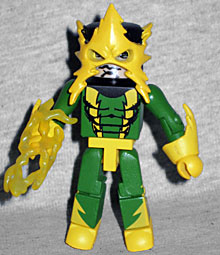 known as Electro! Able to absorb and manipulate near-limitless amounts of electricity, Electro can only be defeated by shorting out or overloading his powers.

Electro is seen here in his classic green and yellow costume, not the blue and white version he wore briefly in the '90s. It's detailed well, with no corners cut: he gets the lightning bolts all the way up his legs, and the ones on both his chest and back. He's also got black anatomical details on his chest - but if you want a simpler 1960s version, just turn the torso around and use the comparatively detail-free back. Electro's mask and gloves are new, because there's no way to just paint that kind of craziness. The mask sits too low on the head to line up properly with the eyes, and it's very thick in the front. Fittingly, he comes with the same lightning bolts as Storm.

In the story where Spider-Man wore this insulated suit, Electro had his mask off the entire time. So it would have been nice if AA had given this figure painted hair when you took off the mask, to duplicate that look. And why not, they've done it before. In fact, that USAgent head would make a nice one for Electro. The black lines used to detail this face seems very thick, much like X-Force Wolverine's was. The thinner the better at this size. If it gets too thick, it almost looks blurry.

The Spider-Man in this set is a rather goofy variant, but it gets some points for being straight out of the comics. And Electro may have some problems, but come on, he's a classic! You can't skip him, if you're a Spider-fan. Overall, they make for a worthwhile pair.