In an alternate reality created by the Scarlet Witch, Peter Parker 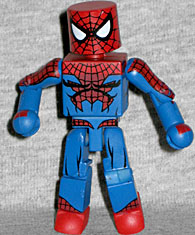 finds himself living the life he always wanted. But his marriage to Gwen Stacy, his child and his fame were lost forever when his human nature was revealed to the mutant-led society.

ToyBiz made a House of M Spider-Man near the end of their nameless Spider-Man line, but it was brought low by action features. This is a Minimate, though, so all he has is paint! The redesigned costume is painted well, but again, the red on his body doesn't match the red on his head and feet - a consequence of putting red paint over blue paint (since the base body is white). The web lines on his back are very straight, as well - they don't have any distortion to suggest a body beneath them. 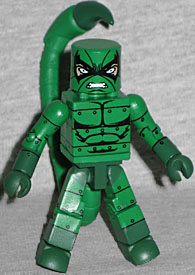 responsible for his super-human strength and stamina, Mac Gargan became the Scorpion to hunt down Spider-Man once and for all. His deadly mechanical tail is capable of incredibly high speeds, acid spray and electric blasts.

This is obviously the classic Scorpion. Not any of the armored suits he's worn, not the female version, not Venom, just the traditional segmented green. Hooray! The suit is detailed simply but well, with lines that continue all the way round the body, a few rivets, and just enough shading to create muscles. He's got an absolutely mad look on his face, befitting the unhinged character. AA went with the later version of his mask, which covers the skin around his mouth, but still leaves his teeth exposed somehow. 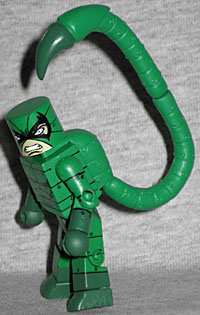 Of course, Scoprion has his tail, but it's not a perfect execution. The tail itself is two pieces, each with a balljoint at the end. It then plugs into a specially designed backpack that connects to the figure's waist and neck. The design is great, but its weight causes problems. The first, obviously, is that Mac can't stand up if the tail is behind him. It doesn't come low enough to the ground to allow you to balance him using it, and he has to hunch over pretty far before you find a balance point. You can use the balljoints to bring the tail around his side, as though he was striking at someone, but then we get to the second problem: the tail is so heavy that the balljoint wants to fall out of the backpack. You have to be careful. Plus, the design of the backpack keeps his waist from turning, so don't plan on any dynamic poses.

Minimates Series 30 had a strong Spider-Man theme (with one noteable exception), so we ran the risk of being sick of Spidey by the end. The House of M costume is a nice way to allieviate that - somewhat. And Scorpion has some problems that you'll have to work around, but he's not a bad figure, by any means.