Since Ghostbusters was released in the '80s and was successful, that meant only one thing: a cartoon series was sure to follow. Actually, two cartoons, but that's not important right now - we're talking about The Real Ghostbusters.

The cartoon featured the same characters as the film, but pushed them 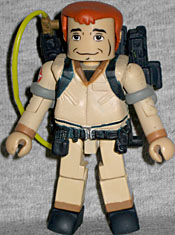 further. For instance, move Ray had a bit of childlike wonder, but cartoon Ray was basically a kid in a grown-up's body. He read comics, he plays with toys, he loves bad horror movies, he... crap, he's us.

Rather than looking like Dan Akroyd, RGB Ray was designed to look like a young Louie Anderson. Sounded like him, too: Frank Welker did the voice as an impersonation. This figure uses the same mold as real Ray, but the colors are toned down and simplified. The proton pack has been retooled slightly, so you can hang the closed ghost trap from it rather than just from his belt. The gun part is a new sculpt, too, and the tube connecting them is now yellow. 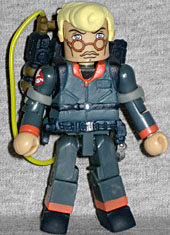 Egon is the brains of the outfit, and the purest scientist in the bunch. He also looks nothing at all like the actor who portrayed him on film, because Harold Ramis definitely doesn't have a bright yellow pompadour. Not blonde, "yellow." While Ray's uniform was close to the movies, the rest of the team went a bit wild: Egon's jumpsuit is dark blue with pink lining. Unexpectedly, his proton pack is a slightly different color, as well: it and the Ghost Trap have a blue tint to it that makes them blend with his uniform well. This Minimate definitely captures the look of animated Egon, even if animated Egon doesn't capture the look of real Egon. 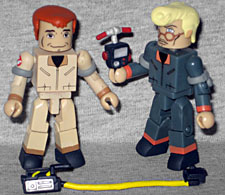 To add a little variety to the figures, they both have paint apps on their chests. If you remove the giant chest caps that have the proton packs attached to them, you'll find simple copies of their uniforms - that means they can look good even when they're lounging around the firehouse waiting for danger to strike. The set includes proton steams for both of them, an extended ghost trap (though they still haven't figured out how to make the foot pedal sit the right direction) and a cartoon version of the PKE meter. 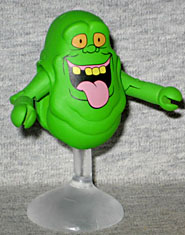 When the cartoon came out, the creators decided to take one of the ghosts from the movie and turn it into a pet/mascot/sidekick. The ghost in question was, of course, Slimer, and when he was adapted to the animation he was given a new, more kid-friendly design. Following suit, this Minimate gets a redesigned body, rather than sticking with the same one the movie Slimers had. This one has a smaller butt and more pronounced features around the face - eyebrow ridges, cheeks, etc. The happy little face is just painted on, and he gets one of the traditional flight stands.

The final figure in this set is the Ghostbusters' secretary, Janine Melnitz. 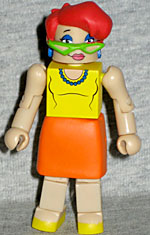 Janine changed character models every season, and this is clearly a Season 1 figure: the triangular glasses were used in Seasons 1, 2 and 6; the giant curl of hair in seasons 1 and 2; and the yellow/orange clothes in Seasons 1 and 6. Thus, when you assemble that Venn diagram, you come down with Season 1. Plus it was the only time she wore a blue necklace and earrings. The yellow used for her shoes should really be brighter, like her shirt - as it is, they blend into her legs and make her look barefoot, which will make all those people who come to our site after searching "[character name] feet" happy. If you really want to see her eyes, we suggest carefully running a knife between her hair lump and her left glasses lens, to separate them slightly. Otherwise you won't get to see her fun expression!

Grabbing the Real Ghostbusters license is a clever way to get some more re-use out of what are some very specific molds - but Art Asylum did better than a plain repaint, giving us enough new bits to keep things interesting.