Freed from the control of Apocalypse, Angel regains his 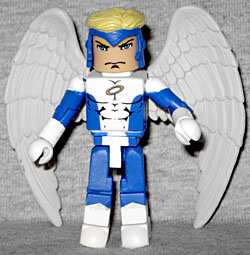 human appearance and feathered wings after an encounter with Black Tom Cassidy. Once again a full-time member of the X-Men, Warren later learns he may not be as free from his past as Archangel as he had thought...

In short... no, in toto. In toto, this figure is Champions Angel in blue instead of red - but that's fine, because it's right out of the comics. In fact, he wore this one first, and got the red version later. This one was given to him by Magneto, and was slowly leeching off his energy. The black apps are the same as the other figure, so it's really just a question of the colors. He has an angrier look on his face, too.

Capable of generating multiple copies of himself, Jamie Madrox 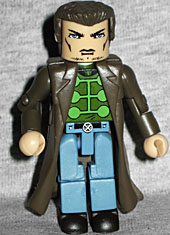 sends his dupes out into the world to gather experience, skills and knowledge necessary to lead X-Factor Investigations - the world's premiere mutant detective agency. Sadly his dupes are just as headstrong as the original.

Jamie's original costume helped him control his powers - otherwise he would have created a duplicate every time he bumped into something. He's outgrown that though, so these days he wears more normal clothes: jeans, a T-shirt and a trenchcoat, befitting a private investigator. His shirt has a pattern that suggests his old uniform without copying it, and he shows his mutant pride by wearing an X belt buckle. 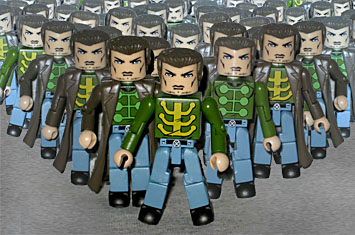 Multiple Man has multiple looks. The figure comes with an extra pair of arms, done in green to match his shirt. The back of his shirt has a different design from the front - it's yellow, and more like the old costume. Technically he should have short sleeves, not long, but that's a minor quibble. He has a plain face with a bit of stubble, but no M tattoo over his eye. Of course, since Multiple Man is such a perfect armybuilder, you can probably guess that this is the set in this series that gets a variant.

Young Warren Worthington III was raised in a world of extreme 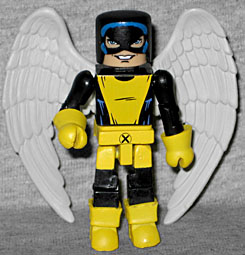 Just like X-Factor Angel was meant to complete a box set, so is this figure. He's in his original X-Men uniform. It's yellow and navy blue, with lighter blue highlights on the dark sections. There are just a few black wrinkles on the yellow portion of his shirt, enough to keep him from looking flat. Because he's wearing an X-belt in addition to the harness that his wings attach to, they're slightly higher on him than on the other Angel Minimates.

Angel's mask is removable, and he gets a new hair piece to replace it. It's light blonde and wavy, and really suits Warren. He has a big, carefree smile on his face - remember, he's got a multi-million dollar trust fund as a teenager, so of course he's going to be carefree and happy. He's quite pretty, too; no wonder the girls all loved him.

When this series was solicited, Silver Age Angel was the standard figure, while regular Angel was the shortpack. When it was released, however, each case had three regulars and one Silver Age - though the three still had "variant" written down the side of the box. A shame, really, because Silver Age Angel is a much more unique offering. Either way, you're going to want them both, because that's the only way you'll come close to building a Multiple Man army.