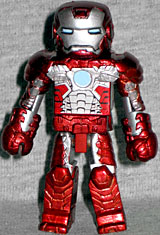 Tony Stark's Mark V armor not only gives the Red and Silver Centurion a new look - it also collapses to suitcase-size for effortless mobility.

This is clearly the suitcase armor, which is supposed to be slimmer and lighter than the normal suit. How did the Minimate manage that? through brilliant design choices. Like the Mk. IV, he's got sculpted add-ons to create the armor - but in this case, it's just a piece that goes over the shoulders, rather than a full-body cap. The upper arms and legs are new pieces, molded to capture the armor's distinctive "zipper" styling, while the details on his torso and lower legs are painted on. The feet have bootfronts to make his legs look armored but not bulky, and the new gloves have cutouts to allow the silver arms to show through. This is crazy good!

The set includes bare hands, for some reason: since the suit goes on hands-first, they would by necessity never be seen. Remove the helmet and you'll see an angry, beat-up face, since Tony spent a few minutes getting his butt handed to him while waiting for Happy to get on the scene. The hair is different from all the other Tony Starks have. 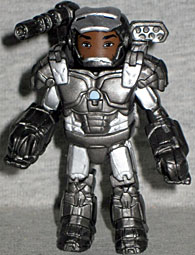 Created for James Rhodes by reverse-engineering Tony Stark's Iron Man, the War Machine armor differs from its predecessor not only in color but also possesses more destructive weapons and raw firepower.

War Machine gets new legs, new upper arms, new gloves and a new chest cap that's huge and bulky, and has attachment points on the shoulders for his Gatling gun and missile pod. The helmet is the same used for the rest of the Iron Man 2 armors, including the second helmet with the flipped-up visor. The toy definitely looks like the movie version of War Machine, but it's brought down slightly for me because of what happened with the Battle Tactics box set. 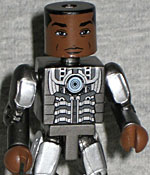 You can remove the helmet, of course, but Rhodey's hair is just painted on, rather than being a separate piece. The face is the same seen on the TRU-exclusive James Rhodes in Mark II Armor. The set includes a pair of hands for when you want to take off the big clunky gloves, and if you pull off the chest cap, the torso is detailed with the rigid grill structure of the armor's interior.

War Machine is good, but the Mark V Iron Man is even better. With two winning Minimates in one box, this is a top-notch set.