Rustin's Spoils of the Week #93

It was a whirlwind couple of weeks for yours truly. After 14 days, 8 airports, 4 cities and 2 continents I made it back home! All of those days were remarkably full which equated to precious little toy shopping; particularly since two and a half of them were spent at Disneyland Paris! The rumors are true, Paris is awesome (even when on a business trip) and DLP proved to be as expected – my favorite Disney Park on the planet (and I've now been to all, expect for Hong Kong)! 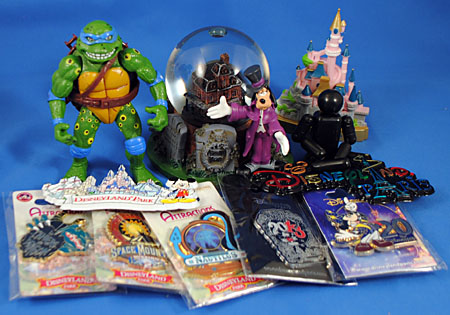 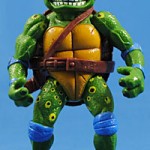 I had the fine pleasure of launching my travels in Boston, which of course meant lunch with the boys (Poe Ghostal, PrktTear and Jester Goblin) and a trip to Comikaze wherein I found this little guy. I, like you, have a strong passion for the Ninja Turtles and while I had many figures (94, in fact - I counted) growing up, I only ever got "Movie Stars" Raph and Mike from TMNT 2: The Secret of the Ooze, so my eye has constantly been out the others. I did score a Leo at SDCC many years back, but when I saw this guy in such good condition for only $5 I couldn't resist a beloved incarnation of my favorite turtle. Sadly this lacked accessories and indeed even the bandana straps that normally would flow from the back of his head. Still though, the paint remains pretty good considering this thing is over 15 years old, and the head, arms and legs remain perfectly flexible rubber. This is a good figure and a fantastic novelty from the proto-golden age of action figures. 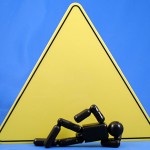 The second stop on the tour was the fine city of St. Louis, MO which means an obligatory, nay - necessary, visit to the astounding City Museum! After many hours of climbing and exploring a trip to the gift shop beheld this to me and it was just too novel to leave behind. At $12 it's fairly steep for the kind of product we're used to getting for that price, but the sheer volume of poseability makes this the ultimate "desk toy!" He's got a swivel neck, "balljointed" (really pin-and-hinge) shoulders and hips, swivel biceps and thighs and hinged elbows and knees. The result of which is that you can achieve virtually any pose imaginable! Add to that a peghole in the "feet" and "hands" for the base, which also supports the large plastic yellow triangle, and the options are limitless. This guy is just as much fun as his simple, and when placed within arm's reach will nary be out of your hands.
*I lost his base somehow while unpacking, hence it is not in the photo 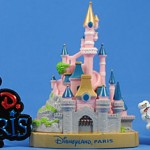 And thus it is we arrive in Paris. My first time there and quite possibly may favorite non-US city (sorry, Vancouver), and though it was for work I most certainly stayed an extra couple of days to tick off the white whale of my proverbial "bucket list" - a visit to Disneyland Paris. Not dissimilar to Tokyo Disneyland it was surprisingly difficult to find anything specifically branded to that park so these magnets were about as best as I could do. I wasn't terribly crazy about the Eiffel Tower one, but it proudly boasted the locale and I do have a visual soft spot for rainbow-esque color arrangements. DLP has the coolest (i.e. most "storybook") castle, so beyond being sculpted I was quite drawn to the castle one (despite is moderate production quality), and the white is just a nice, simple sculpt featuring the key visual highlights from each Land - Captain Hook's ship, Big Thunder Mountain, Sleeping Beauty's Castle and Space Mountain (though the colorings aren't quite accurate). These are just nice, classic mementos. 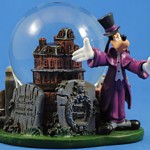 As you well know, The Haunted Mansion is my most beloved Disney attraction so I was on an special hunt for product from it at DLP not just for that passion but for the exclusivity of it being "Phantom Manor." Like the vast majority of things at that park, the ride is familiar though markedly different - there, it is in Frontierland and themed to the Old West (indeed, in the stead of the graveyard jubilee in the Haunted Mansion, Phantom Manor gets a psychedelic Old West Hell!). Sadly, though, merchandise in general is uninspired over there, generally being identical to what we have in the states, and almost specifically avoiding anything related to the attractions. It was thus that I was elated to accidentally stumble upon this small snow-globe! We see the Addams Family-esque Phantom Manor within the globe, which utilizes bats rather than snow, while the base is ringed in novelty headstones from their Boot Hill and Goofy, dressed in the Cast Members' costume, bids welcome. This was the only one still packed in a box, so it's what I grabbed since it had to make the trip back the states, but sadly I gave it a very cursory once-over and am thus stuck with a globe that has an air bubble and a Goofy with a purple splotch under his chin. Alas - Woe and Chagrin! Regardless, it's a great remembrance from a special trip and a cherished addition to my collection. 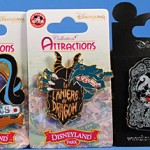 Disney has inexplicably turned cloisonne pins into a brisk trade with collectors and though it seems to be cooling down in the US it definitely is little more than a side-line at DLP. I snagged three attraction pins featuring particular favorites: Space Mountain (there, it is a steampunk-ish proper steel coaster with a mag-launch and a loop), Les Mysteres du Nautilus (a walk-through attraction recreating the major sets from the signature 20,000 Leagues Under the Sea vehicle) and La Taniere du Dragon (my absolute favorite place in all of Disney, and possibly the world - a perfectly created cave under the castle home to full-sized animatronic dragon). I then got the "2013" pin to commemorate my year of visit which happened to be just a few short months after the 20th Anniversary of the park in 2012, so there was an abundance of that merchandise as well. The pins really aren't anything that exciting, but they are nice mementos and I am quite happy to have some kind of merchandise from both "Nautilus" and "Dragon."

This entry was posted in Disney, Playmates, Rustin's Spoils of the Week and tagged TMNT. Bookmark the permalink.

5 Responses to Rustin's Spoils of the Week #93