For those of you who didn't enjoy our actual 100th Minimate Mini-Review, here's one with the number 100 at the top of it!

Equipped and trained to deal with the most Xtreme situations 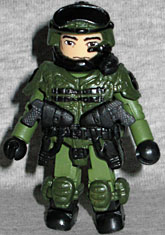 that can arise, this pair is best equipped to handle special reconnaissance, intelligence gathering and unconventional operations. This pair is highly trained to use special equipment, gear and tactics and special operations.

The first set of Elite Heroes we reviewed was firemen, and this one is soldiers. Our first figure isn't just a guy in green fatigues, though, he's wearing a full set of tactical body armor. There's a normal Minimate body underneath it all, but his chest cap is a highly intricate vest sculpted with armored pads and nylon straps. There's a radio on the shoulder and two working holsters on the front. He also has pieces that go around the lower legs to create kneepads and pockets.

The helmet is a little bit weird, in that the piece that you'd normal think was meant to represent a microphone is higher up on the face, resting just under the eye. Is the M.A.X. team using Google Glass? If you take the helmet off, you can replace it with wavy red hair. Wavy hair? If he's in the military, shouldn't that be a buzzcut?

The second figure in the set is a little more traditional: he's not packaged wearing his tactical gear, just a simple green uniform (which, for some reason, has a golden badge on the left breast). His shirt is detailed, and he has a fancy belt, but that's all. It's still more than the other guy gets, since his torso is covered in the package - because if you can't see it, you don't have to paint it. His hair is the same mold, but it's brown. That keeps them from looking like twins (even if they do both have the same face painted on their heads). 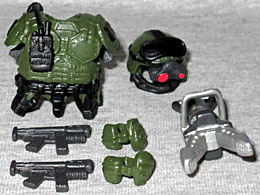 The set also includes a whole slew of accessories to outfit your soldiers. For instance, a second tac vest and a helmet (with added night vision goggles hanging down the front), plus extra boot-front dealies. There are two assault rifles (taken from the vintage BSG Cylons), four pistols (for the holsters on the vests), and a jaws of life for some inexplicable reason. Still, it's always nice to get bonuses, right?

Given how ubiquitous soldiers are in action stories, this Elite Forces set is a great addition to pretty much any Minimates collection. Plus, it's important to support companies when they try to create original properties, rather than just licensed goods.