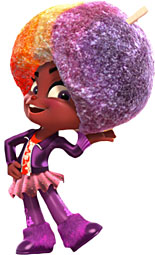 A Sugar Rush racer with some serious style, Snowanna Rainbeau is a vivacious young spirit with a personality as loud and colorful as her hairdo. With a boogying beat in her soul, she's as cool as ice! Watch out racers, she'll lay down a funky track with her chilling charm and you'll never see it coming!

Why does Snowanna, a character from a 1990s arcade

videogame, have such a 1970s style? The same reason a videogame from 2009 would be based on 1980s heavy metal: nostalgia. Snowanna's the only black Sugar Rush racer, probably because they needed to justify her big snow cone afro - she's even got a little "wooden stick" spoon sticking out of it like a pick! The toy's skintone is darker brown than it was in the movie, but at least she's not purple (like a lot of the merchandise is). The big frown on her face is pretty weird, too. Her hair is slightly rainbowish, but not as much as it should be: it needs a lot more purple than it has. 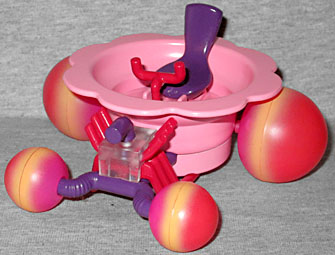 Actually, the same is true of her car: its wheels are meant to be the same shaved ice as her hair, with the same variegated colors (red-orange-yellow-pink-purple. On the toy, they're perfectly smooth - like gumballs - and are missing the same purple apps. At least it's consistent. The body of the car is a pink plastic cup like ice cream is served in, and the seat is a bent spoon. The engine block appears to be an ice cube, meaning this is one racer who definitely need to worry about overheating. 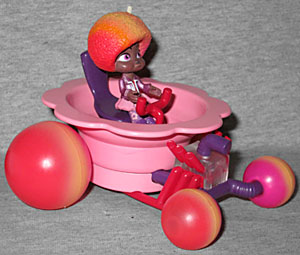 The Fro Cone leaves its driver more exposed than any other kart in Sugar Rush. The only thing between Snowanna and the open road in the event of a crash is the steering wheel in front of her - and since the driver figures only move at the shoulders and hips, she sits up high enough that even the steering wheel isn't in front of very much of her. Better be careful, girl! The rear wheels share a single axle, so they spin together, but the front wheels roll independently on their bendy-straw struts. 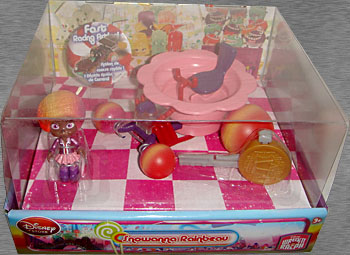 The racer sets are sold in nice boxes that display the toys well. The entire top is clear, allowing full views of the car and the figure (as well as the golden coin key). The bottom of the display is pink and white checkerboard, showing the start/finish line, while the back shows some of the grandstands - the gumdrops that are marks for Minty Zaki, the Jolly Ranchers that can't get enough of Swizzle "The Swizz" Malarkey, and Snowanna's own gumballs. This is a really lovely display, perfect for MOC collectors.