After their devastating defeat against Bastion's forces, the X-Men must regroup and rebuild... but some of the mutant heroes have other plans! When a secret society resurrects the feared arch-villain, Apocalypse, Wolverine gathers a brand new mutant black-ops team; the only team strong enough to take Apocalypse down - by any means necessary! 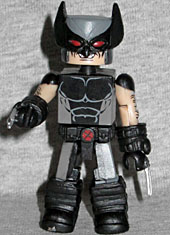 Wolverine and the members of the Uncanny X-Force have each been twisted, programmed, and manipulated by unpleasant people. They struggle to overcome their past, yet they accept that they are killers, each capable of making the hard decisions.

Really, Art Asylum? We know Wolverines are important to the Marvel Minimates line, but come on: there was already an X-Force Wolverine out there! Granted, it came out in 2009 and this set came out in 2011, but there was nothing really wrong with it. In fact, you know what? I'll say it: the older one is better. This one has a new mask, new gloves and new belts, but none of them are really that great.

The mask, in particular, is not good. It's too detailed and sits too low on the head. There's a big, hooked nose for some reason, and it covers half the mouth: rather than a snarl, we only see his lower teeth, so he looks like he's smiling. It's slightly better when you take the mask off, but he still ends up rocking a pretty epic unibrow.

Make no mistake about it, Deadpool is a mercenary and goes 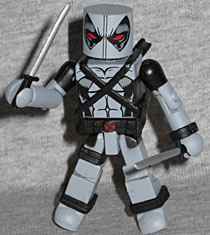 where the money is. For now he his happy to take Archangel's money... But will there come a time when he's given an opposing offer he just can't refuse? And will Wolverine be able to keep him in line if and when that time comes?

X-Force Deadpool is basically just the Series 28 Deadpool with a different paintscheme and fewer add-on pieces. He's gray and black - X-Force's team colors - and the eyes of his mask are red. He uses the crossed straps, the shin bands and the thigh strap from First Appearance Deadpool, and the wristbands and belt from Series 28 (mine was missing a bracelet out of the box, but it looks fine). He's only armed with two swords: no guns, no knives, no holsters... just the swords.

Archangel and Wolverine serve as co-captains of the team. Warren Worthington has philosophically begun to distance himself from the X-Men; he still believes in Professor Xavier's dream 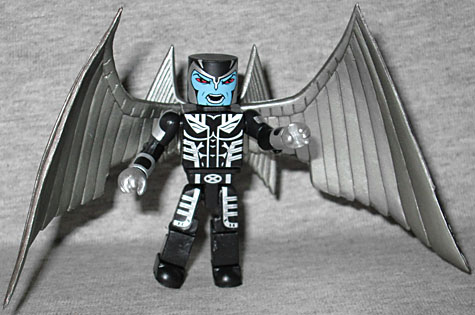 of integration as a feasible reality, but he has some very different ideas on the means.

Archangel has the same metal wings as the last figure, but gets clawed hands to show his savage nature. His costume is mostly black, with intricate silver details painted on to break up the darkness. It's very impressive work. His skin is a slightly darker blue than the previous Archangel Minimates. His eyes are red, and his mouth is open in an angry yell.

Psylocke has been dedicating many hours to mediating on the severe turn her life and mind have taken since entering the "Siege Perilous." She seeks a way

to reconnect with some part of who she was, while still using the abilities she has to save the world - and other mutants - more pain.

This is the third Psylocke Minimate, and it's easily the angriest one yet. Maybe hanging around with X-Force isn't the best thing for her state of mind, huh? Her ponytailed hair comes from Spider-Woman, but it's been painted a very nice purple. She's wearing her longstanding "bathing suit" costume, but it's X-Force black instead of X-Men blue. Her sash is gray, to keep the theme alive. There's an X logo in the center of the sash, and her anatomy is painted on her torso. The random straps on her arms and legs are crisp. She has the same sword as Deadpool, but also manifests her pink psychic blade - the focused totality of her psychic abilities, in case you hadn't heard.

There's really no reason for there to be a Wolverine in this box set: Uncanny X-Force was a five-man band, so they could have dropped him and given us Fantomex, instead of holding him back for a later two-pack. Or maybe Genesis, the teenage clone of Apocalypse. Or heck, since there were already X-23 and Warpath Minimates, they could have expanded this set to the previous X-Force, and given us a Minimate of Wolfsbane, Vanisher, or Elixer. But not this bad Wolverine.