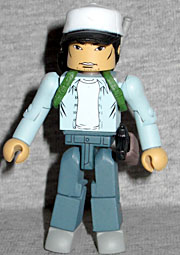 As one of the youngest and fastest member of the band of survivors, Glenn often volunteers to gather supplies and perform reconnaissance. When he first meets Rick, he is scavenging in the zombie-infested city of Atlanta.

Yes he is. And before that, he was in Macon, first hiding out in a pharmacy, and then holed up (briefly) in the Travelier Motel. Glenn is definitely one of the more memorable characters from the comic (in that I remembered he existed). He's wearing the same hat as Shane, just painted white and black (no Yankees logo, though - that would have required licensing fees, so paint your own). 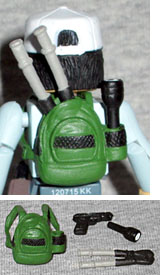 He's wearing a light blue shirt and darker blue pants, and has gray shoes. He has a holster on his left hip, and while the holster itself is brown, the piece that fits into the figure's waist to hold it in place is the same blue as his legs. Nice!

Glenn's accessories are pretty awesome. He's got the gun to fit in the holster, of course, but that's expected. Since he's the group's "runner," he also comes with a removable backpack (green, though who knows what color it was meant to be in the comic). He's equipped with a pair of bolt-cutters and a flashlight, and they both fit in the backpack! We love figures that can hold all their accessories at once.

Survival tip: zombies prefer human flesh, but they will feast on a deer or even a horse if the opportunity presents itself. Luckily, animals do not possess 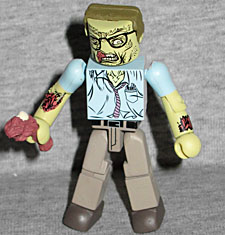 Though it may not seem like it, that bio actually does relate to the zombie in question! He's based on one that appeared in issue 3, eating a deer. That one was a lot closer to being bald than this one is, but the toy does get a neat new "comb-over" piece that attempts to duplicate the look (though it's a bit too thick on top - the Hannibal Lecter head might have worked better). His glasses are askew, and there's a chunk of deer meat poking out of his mouth. His skin is yellowing, and there are giant wounds on both forearms. His rumpled shirt is painted with the appropriately loose necktie and a pocket protector. He even gets an accessory: a meaty bone to chew on!