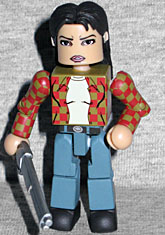 the hospital while she and her son escaped from the outbreak. Rick later emerged from his coma, but not before Lori had found solace with his best friend, Shane.

Why is Lori, a pretty major part of The Walking Dead, only available in a TRU-excluive set? As I write this, she's still the only verison of Lori available (though unless there's a shipping delay, a second will be out by the time you read it). That's nuts! She's in her "standard" outfit, jeans and a plaid shirt, which we would normally chalk up to Generation X fashion sense, but she's from Kentucky - that could just be how she dresses. The plaid pattern is well painted, but it doesn't continue over her shoulders. Her black hair falls halfway down her back, and she's armed with a rifle.

While caring for his injured friend Mike, Terry was bitten, and both became

zombies. When Mike's girlfriend Michonne returned, she removed their jaws and arms to make them harmless, and used them to hide from the zombie horde.

Again, why is such a memorable character only available as an exclusive? It's weird! Michone's pet zombies may have not had a huge bearing on the plot, but they're crazy iconic. Terry is wearing blue pants (to set him apart from Mike's brown), but his skin is an identical gray. It's interesting that Mike was black and Terry was white, but they both ended up the same color as zombies. Ha ha ha! Equality now! He does get the same neck chain and shoulder-meats, as well. We don't see any exposed ribs, but his jaw is much more... absent.

Lori and Terry are an odd choice for an exclusive pair, but hey, if that's what it takes to get them out, more power to Art Asylum for getting it done.