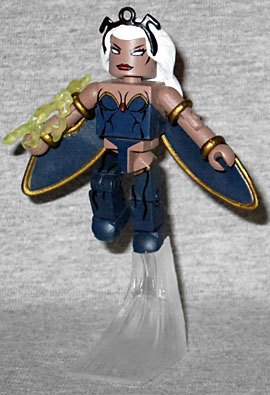 Ororo Munroe's parents died when a plane crashed into their home, and Ororo became a street thief in order to get by. Upon reaching puberty, she discovered her mutant power to control the weather, and she was later recruited to the X-Men by Charles Xavier.

The costume Storm was wearing when MvC3 came out is basically a black swimsuit with high boots, a two-part cape, and her original headdress. The hair and cape pieces are new, but the way the rings fit onto her arms, you lose the elbow joints when she's wearing them. That's annoying. She gets the same lightning effects as the last Storm, and even has a similar skintone. The set does include a clear flight base, so of course that belongs to Storm, as well.

To save her partner Chris, Jill threw herself off a cliff along with the 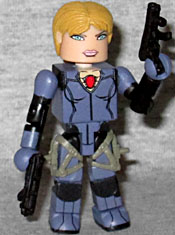 villainous Albert Wesker. Presumed dead, she survived the fall and was taken by Wesker to be one of his experiments. She has since been outfitted with a mind control device, making her into Wesker's puppet soldier.

Oh, hey, that explains what the heck was going on at the end of Resident Evil: Afterlife. If this figure is anything to judge by, the movie did a really nice job of capturing her, the master of unlocking, in live action. Jill was originally a brunette in a sensible tactical outfit - these days she's a blonde wearing some kind of high-tech purple and black catsuit. Because if there's one thing the zombie-fighting game needed, it was more sex. She has two HK MP5s that plug onto the straps on her legs, and a nice new ponytail.