I had the great pleasure of spending some time in Boston recently which, of course, means I get to hang out with my fellow OAFE Poe Ghostal! We spent the day hunting around several great collector stores, including, of course, our beloved Comicazi. We also headed out to this store called That's Entertainment which is was predominantly a giant comic shop but with a bunch of gaming stuff and toys too. They were having a "buy one, get one" sale on older figures so I was able to fill in some holes with a healthy dosage of '90s nostalgia. Lets us take a looksee! 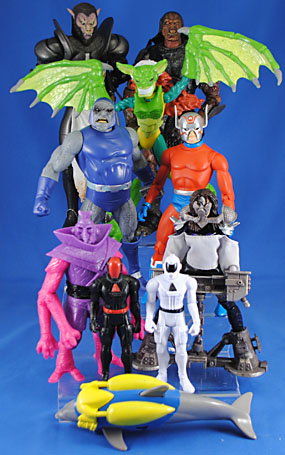 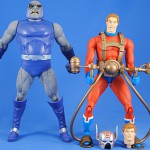 Darkseid is a tremendous sculpt with gorgeous little cracks on his gray skin. I love his snarling expression though this "cap/cowl" thing seems a bit off somehow. His eyes light-up though the 15-year-old batteries had partially corroded and died within him. He only gets six points of articulation (neck, waist, shoulders, wrists) and all are swivels. A mother box is sculpted into his left hand. He does have a major flaw though and that's that he is way off balance. I feel like it was a factory issue in molding him but based on the angle of the ankles he leans forward meaning you have to angle the arms back in order to get a precarious balance, so he's sort of stuck in a "Part of your Woooooooorld" Ariel chest-thrust. Orion gets a swivel neck, balljointed shoulders, hinged elbows and knees, T-Crotch, hinged ankles and swivel wrists for 13 points of articulation. He also comes with a removable rocket sled and helmet but best of all are his interchangeable heads! Neither face much resembles Kirby's art but they are definitively Bruckner's interpretation; they look timeless and are in the same style as the rest of DC/Bruckner figures of that time - so I ain't complaining! 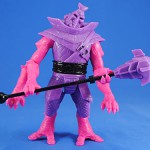 This figure was a preview release for The Power Lords Fan Club and I must confess I was fairly unimpressed when I first saw it. Purple and pink? Well, in person the neon pink really pops and I dig him a lot. I do wish he had a pink head too, but I get the skin/armor idea they were going for here. The figure itself is beautifully sculpted with all the kinds of detailing that made me with fall in love MotU back with the MO2K line, and it's great to finally see the Horsemen able to cut loose again after so many years of "simplified" aesthetics. The articulation is pretty good with most places using Glyos pegs allowing for a reasonable amount of interchangeability. The head is particularly stellar as it features a totally flawless ball-in-socket joint offering a huge range of motion. The mace/staff was sort of tough to assemble since the staff is thin and the mace-head's peghole in tiny but with some care it can be got done. 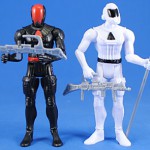 This is kind of brilliant - just take the Adam Power body, make helmets and bang, automatic armybuilders! In fact, it's these such troops that are the most appealing and most exciting thing about the line to me so I was really jazzed to get these two. These are incredibly fun to play with and are thusly perfect desk toys! The gun and staff accessories are alright but feel very prone to bend-damage to me. I would have loved some kind of "more" articulation for the wrists but really the only frustrating thing to me about these is the the elbows, which use a smaller-than-standard Glyos joint significantly reducing the options for interchangeability. Apparently some people have complained about the Glyos joints here due to the requirement of a balljoint socket but I'm sure that once we get more figures in this style the interchangeability will be great! 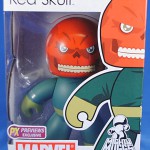 I really, really grew to love the Mighty Muggs line. Even though it was kind of a corporate take-over of an Indie/DIY art movement the aesthetics tended to be great and I do rightly miss this fad. Red Skull here was a Previews Exclusive which meant he was tougher to find, more expensive and less likely to get marked down. But, patience hath prevailed and he is thusly mine! I really dig that he's in his silver age green jumpsuit, but of course it's his head that rocks the cazbah. I don't know who the artist is on the line but they sure knocked this out of the park. Incredibly effective in its simplicity, you almost forget that any sense of depth is purely an illusion of color shading. I am a staunch anti-MOC-er, but when it comes to this line I've kept everything boxed. We get a close up of the face art on the top and then half-images of the figure on both sides so basically any way you store these you get a cool looking collection. 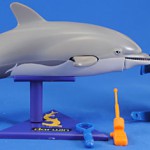 Seaquest DSV promised to take Next Generation and... PUT IT IN A SUBMARINE!!! This was literally the best combination of my interests until/since Stargate merged sci-fi with Ancient Egypt. Sadly though, the show was awful and I couldn't stick with it long. Playmates, though, was apparently banking on it being their next Star Trek so they put out a pretty good toyline for it, the star of which was the wise dolphin Darwin. While "just a dolphin" he does have some nice, subtle paint accents that really improve the realism. By squeezing his two pectoral fins his jaw opens, and if you do it firmly enough he squeaks too. He comes with an orange communicator and blue... thing, plus a standard figure base and, of course, his signature scuba suit. That scuba tank is just plain cool and iconic! Considering it's Playmates it's done fairly well, though the plastic straps are a bit thick and tough to connect. I was pleasantly surprised to see that they included a "perch" for him to be displayed on which connects to the foot-peg on the base. Sadly, annoyingly and frustratingly he doesn't fit on it while wearing the scuba tank though. 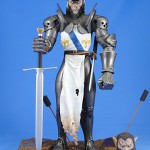 I was never really that into the Stan Winston Creatures figures but this guy was always pretty appealing to me. It's such a simple yet awesome concept I'm shocked that no one has ever taken this over to films! Werewolves in armor - I love it! The figure is a honking big 8½" tall and has about 16 points of articulation. He also gets a broad sword, a dagger and two heads - helmeted (with hinged face guard) and unhelmeted - plus a simple base with two arrow shafts that plus into it. One definitely is reminded that this comes from a company with a short history of making toys because the proportions on the figure are a bit wonky and the articulation is clunky. He can hold the sword with both hands though, so that's a decided plus. Despite being somewhat underwhelmed by this figure I am quite excited to have him, and find it especially fitting that I got him in Boston since I have picked up the Trakk figure from this line last time I was there too. 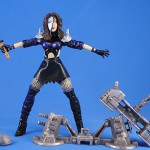 I always liked the idea of the Vault line though I could never understand why they only made three characters and none of them famous (Ultron was the most well known but it's not like he was on the animated X-Men or Spider-Man shows). At any rate, Mary here comes to us in a 100% unique sculpt standing about 5" tall and features seven points of articulation. She's wearing a pleather skirt and comes with a katana. Paint is remarkably good - her face is flawless and I think her fishnets turned out great. She is saddled with a dread shoulder-based play-feature, though. She's packed with a softgoods straight-jacket and a four-piece restraint thing which she can "break free" from by pushing the lever on her back which raises her arms. Whaaaaaaatever. For what it is, this is a pretty great figure and I am hard pressed to imagine that, short of a Minimate, she'll ever see toy-form again. 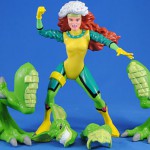 The Monster Armor line was easily one of the most memorable weird-o one-offs that ToyBiz ever did. I'm really shocked there was never a second series, actually. Rogue was always a bit of a grail to me as she was pretty kick-ass but her signature Jim Lee look was always hard to find and rarely ever repeated. The face is pretty weak and the hair is... well, big. So big in fact it's glued in place to her head and back meaning no head articulation for you. In fact, all she gets is balljointed shoulders, V-crotch and a propensity for falling over. As for the gimmick of the line, her "monster armor" converts the peppery southern belle into a "Leech-Bat" by applying pieces to her feet, forearms, chest and face. Both the chest and face pieces fall off easily but the others hold well. Interestingly the dragon legs have a hinge joint at the top of the feet but it's just a long joint they can not be moved... so... whats the point? This is just a wonderfully bizarre figure that is, at least, singular in how visually striking it is. In fact, at this point in life, I'd love to have two complete sets so that I could display both "looks" for each figure! 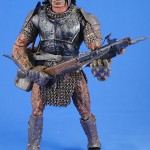 I was excited as hell when I found this figure but it wasn't until they handed me the receipt that I realized this was the hated Crossbow Uruk-Hai and NOT the beloved Battle-Cry Uruk-Hai... DAMN IT! So... there's $15 bucks down the drain... You may recall that the Crossbow Uruk-Hai barely appears in the film but was featured in the "Helms Deep" two-pack with the Galadhrim Elf (aka Jesse Falcon Elf) so, since they had the tooling set, this was this Uruk they kept re-releasing never getting to the actual army-builder from Helm's Deep until the very last series of the entire line. Ugh. And really, at the least, all they had to do was sculpt a new helmet and replace the crossbow, arrows and quiver with a sword and shield. Release drama aside this is a pretty great figure with... well more articulation than I'm interested in counting. He comes with five arrows which fit in a large quiver on his belt and also fire from his crossbow. The figure is at least a decade old and has started to decompose. All the rubber elements (armor and, especially, the helmet) have a thorough coat of sticky residue making this guy a real pain to handle. I wish I had realized my mistake before I paid for him but, I guess at the end of the say anything that helps me build my Uruk-Hai army is a good thing.

This entry was posted in Rustin's Spoils of the Week and tagged Captain America, Daredevil, LotR, Power Lords, X-Men. Bookmark the permalink.

6 Responses to Rustin's Spoils of the Week #132