Madison Jeffries is a mutant who can shape metal, glass and 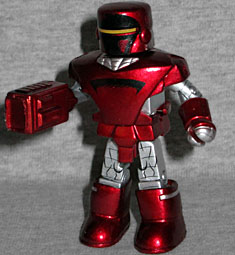 plastic with his mind. He helped upgrade the Box battle suit for Canadian super-team Alpha Flight, and took control of Box when the original pilot went rogue. He can now phase in and out of the armor as well as alter its shape and size.

Wow, it's a guy in bulky red and silver armor - haven't seen that before! Actually, we haven't seen most of him before. I'm certain those boots have been used somewhere before, but the rest of the add-ons - the waist piece, the chest cap, the gloves and the helmet - are new. His arms and legs are painted to look banded, white the upper chest and the back of the neck have the same designs sculpted on. To show his shape-changing abilities, you can replace one of the hands with a square, blocky blaster hand.

If you remove the helmet, there's a translucent yellow head with some shadows painted on to suggest a face. The only thing we can figure out is that it's supposed to represent the way he phased in and out of the armor (rather than traditionally "wearing" it). Eh, it's not the worst choice in the world. The set also includes a trans yellow Nova stand, which never looks right when they try to give it to anyone but Nova. 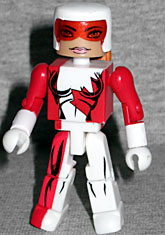 Heather Hudson's husband James was the pilot of the Guardian battle suit, stolen from a weapons supplier and used to start up Alpha Flight. When James was believed dead, Heather modified his battle suit and underwent training with Wolverine to became the Canadian team's new leader.

If there was any doubt that a woman will look better than a man wearing the same thing, here's Vindicator wearing her husband's old costume. On him it was just a really nice piece of graphic design; on her, it looks like a costume. You have your choice of three headpieces: fully exposed hair, or one of two masks with a visor on the front and a ponytail on the back.

Why two? Well, she actually wore a red visor in the comics, but was colored with a blue one often enough that Art Asylum opted to include both, so fans could pick which look they like better. They're molded from translucent colored plastic, then painted. The white paint isn't quite thick enough, so one's tinted pink, and the other's... why is there no single word for "light blue" that's analogous to pink's relationship to red? She also gets a swooshy flight stand.

This Toys Я Us exclusive is clearly meant as a companion to the two Alpha Flight box sets, and if I'd had even a modicum of sense, I would have just set up that first review with room to expand it as the others were released. But I didn't, because I'm dumb. We still don't have every notable Alpha Flighter, but this is still a pretty impressive team you can assemble. 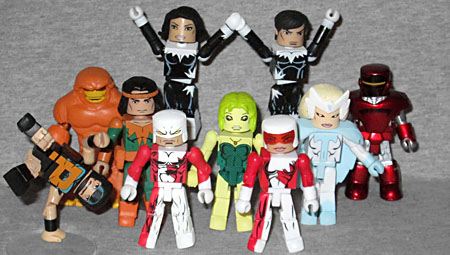