After the fall of the prison, Rick nearly died from his wounds and 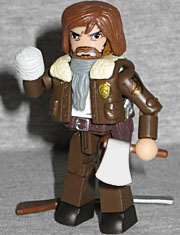 slept for a few days while he healed. When he awoke, he was changed by his recent loss, and swore to never let it happen again.

This is our second left-handed Rick Grimes, but it's done a lot better than the last one. His bandages are now a new piece worn over the end of the arm, rather than simply being painted on. He's wearing his deputy's jacket, and the patch on his left shoulder is partially torn off. He's wearing a grey scarf over his dirty T-shirt. Rick is armed with his favorite axe, plus a rifle and his revolver (which also requires a new belt with the holster on the left. His hair is getting shaggy, and his face is painted with a thick beard. 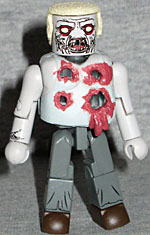 Survival tip: it's not the number of bullets, it's the placement. Even a dozen shots to the torso will not stop a charging zombie, so always aim for the head.

This is a fairly meaty zombie - no wonder somebody aimed at center mass! The real reason is that Art Asylum gave him a new chest cap with four large bullet holes going all the way through it, and there's no way to make one of those skinny. The torso underneath is clear, so light can shine through, but the internal structures keep it from working as well as it should. He has close-cropped blonde hair, and missing a lot of his teeth.

It's kind of tough to figure out which zombie in the comics he's based on, because he's actually based on two different tpb covers! See, the zombies along the bottom of all the Walking Dead trade paperbacks form an unbroken line, and this zombie (or his head, at least) comes from the covers of both Volume 9 and Volume 10! How unique!