For a hot minute back in the '90s, Valiant Comics was one of the biggest publishers in the industry, nipping at the heels of Marvel and DC. Then they had a crossover with Image comics, and it drove them out of business and nearly crashed the entire industry. Really. The company was sold to Acclaim, who mined the properties for videogames, and then that was it.

But in 2012, Valiant came back, and they came back big. The comics have been a hit, and now thanks to Art Asylum, Diamond Select Toys and Toys Я Us, Valiant has its first-ever action figures. 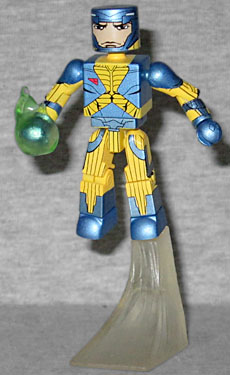 Aric of Dacia, a fifth century Visigoth armed with the universe's most powerful weapon, is all that stands between the Earth and all-out annihilation at the hands of the alien race that abducted him from his own time. The Vine destroyed Aric's world. Now he will give them war.

X-O Manowar has been a flagship title of both versions of Valiant - possibly thanks to its simple-to-grasp concept of "what if Conan was Iron Man, but also his armor was Venom?" Yes, technically the suit is alive. While the blue and yellow colorscheme has been carried over from the '90s, the actual shapes have been tweaked. The blue is meant to be a raised carapace over the striated yellow "undershell," but here it's just painted on (which, amusingly enough, makes him look like a member of the US Olympic Luge team).

The figure does not include his energy sword, but we do get an energy blob in translucent green. Also, an alternate head. Since his armor's helmet is a painted feature, it's not removable - thus, the head would have to be an alternate! It's unmasked and angry, and looks like it belongs to a barbarian. To complete the look, he has Emil Gregg's hair, in light blonde. The set also includes a one-footed flight stand for him. 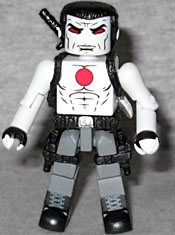 The original version of Bloodshot was a mob hitman, while the new one is a former soldier - but they both feature chalk-white skin, glowing red eyes, and a large circle in the center of their chest (because the original was a 20th century "preboot" of Rai, a 40th century Japanese hero). He's wearing grey pants and black boots and gloves, then has holsters, a utility belt, and a harness around his shoulders.

As a character with his origins in the early '90s, it should come 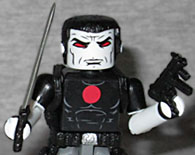 as no surprise that he carries a lot of guns. Two pistols and an MP5, to be specific. And since he was ultimately based on the hero of Japan, he has a katana. Rather than an alternate head, he has an alternate chest: this one is black instead of white, to show him wearing a T-shirt (the set also includes extra arms, with the sleeves painted on). He's still got the big red dot on his chest, though - no telling whether that's just a pattern on the shirt he's wearing, for branding purposes, or if he actually cuts holes in all his clothes to show off the goods.

The set includes a free comic (inside the customer feedback insert, so open it up before you recycle it), and there's a code ("BATTLEMATES") for free digital downloads of X-O Manowar and Bloodshot #1.

Valiant ultimately wants to put its characters into movies, and recently partnered with Chinese media company DMG to make that happen. So while these may be the first Valiant action figures, they probably won't be the last.