Imaginext's little line of blindbagged figures is the series that just won't quit! For whatever reason/s, Mattel does virtually no advertising for Imaginext so it's always a surprise to see a new series of figure suddenly show up on shelves suddenly. I have a feeling this will be like Series 2, and be kind of tough to track down as I haven't heard or seen much hubbub about them yet and indeed only found them at one Meier while on a trip to the midwest. Time will tell, though, and let's hope this does see a wide release because it's a very good series! Not only do we get some really cool figures, we also get some ethnic AND gender diversity for once, too! 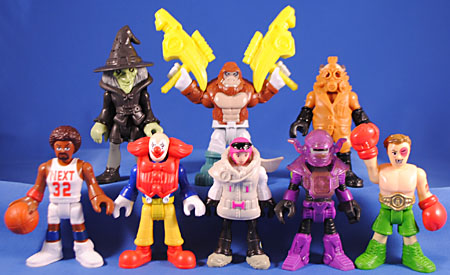 This fourth outing get is a bag very similar to the previous series' design but now features a soft aquamarine as the signifying color and it looks pretty and feels surprisingly different considering how similar to the light blue of Series 3 (which I hated) it is. I would prefer they use bolder colors like the green of Series 2 or like Lego does with their Collectible Mini-Figures but this works fine. Something that really helps, too, is focusing the "group shot" around a central, easily identifiable figure to distinguish between the series. The back of the pack show the silhouette if a basic Imaginext figure and of an accessory, filled in by the series color. The accessory is clearly the Mad Scientist's lab set which marks a first for this line - it's the first time the accessory is actually something in the line; nice! As always, Imaginext remains the most user friendly of all blindbagged lines by punching in a code number on the upper left of the back to indicate who is inside the bag! God bless your kindness, Mattel!!! As always, I've listed the numbers with the figures below to help make your collecting just that little bit easier - enjoy! 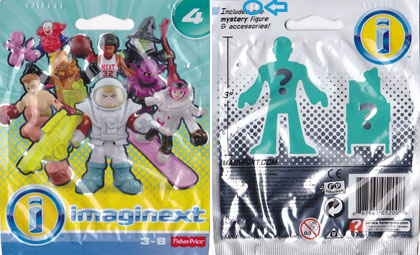 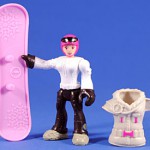 We begin with the first two female figures in the line! It only took four series (which does betray the heavy boy-based Imaginext shopper) but I love that they're diving right in and giving women 25% of the lineup. I also REALLY love that this chick isn't a princess or a shopper or mom or a grandma or a fairy, as per the norm from Playmobil and Lego. Generally chalk up snowboarders to the same "whoa, X-Treme, brah!" pandering as Skateboarders and Punk Rockers but I think it's a perfect choice for the girl; it gives her not only a bit of an edge for the little boys but also gives her a "vehicle," aka something to do. Now they can woosh her around the sofa and and actually engage/play with this a toy. It's a bit bland but I also like the simple color palette and limited use of pink - it's appropriate and feels "right." It's not overwhelming which I imagine won't turn off "girls are icky" young boys nor ignore what draws young girls. When liberals argue for gender equality in toys this is exactly what they (we!?) are after and Mattel/Imaginext gets major, major kudos from this humble shopper for nailing it. She comes with removable cold weather gear and her snowboard. I think she looks okay with and without the coat (though I will concede the pink helmet keeps her from meshing particularly well with the Artic Explorer from Series 3). The Snowboard is simple but nice, and due to sculpt the feet only fit on the pegs in one way but they even included a subtle grid pattern the shape of the feet to make it clear how to place the figure - nice! 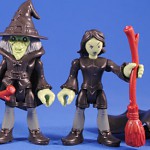 Oh man... this is Imaginext at its finest! This is a very logical, very fun continuation on the Monsters sub-theme running through the whole line. The figure is stellar and a wonderful sculpt but what really makes her great is that the "costume" piece transforms her into a very different character! It would have been very easy, expected even, for them to have just had the costume be a hat/cape combo but I adore the "ugly hag" head that they used - it gives you both the classical "evil" Witch character plus the modern "beautiful" Witch premise (indeed, everything about the unmasked figure screams "Wicked" to me). And, I'd be lying if I said there wasn't something truly beautiful about the unmasked head... that's a girl I'd ask out for coffee! The figure also comes with a broom which if pretty fun, but it sadly cannot be ridden. My only "complaint" here would be the flat brim on the hat really obstructs a the hag-face and I would have preferred a more tilted hat, but all in all I adore this figure too much to really have any complaints. 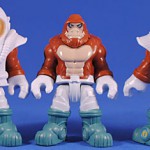 I mean... COME ON!!! How can you NOT NEED this figure!? He's so delightfully wild, it's just too much fun! He comes with a removable helmet pack and a gol-darn banana gun! It is kind of a bummer that the helmet's visor is solid and painted silver rather than translucent as implied on the package but I get it. I do also wish the gun was cast in yellow rather than neon yellow; it's such a bright hue that the sculptural details are lost. However, my only real problem with the figure is his head. Once again they sculpted him in a way to not have neck articulation (weird and annoying, guys) but the face sculpt, particularly the eyes, is very weirdly geometric and deeply inset at the nose - it's looks wholly unnatural and entirely awkward. Otherwise this is the very height of the concept of one-off figures and I really hope to see more bizarre and novel things like this in the future! 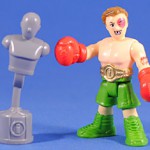 Sports figures are never that exciting and while this guy follows that trend they at least plus him up with paint to help him along. The sculpt is nice and I quite like the look of the gloves but it's disappointing that they're not articulated. He's wearing a champion belt which looks great but also suggests he's a winner so it'd be nice if he came with a Rocky-ish cape or robe. Or if the belt were removable - that's have been pretty fun, to put it on others! But, through paint, he has a "Mother" tattoo and a black eye which add a great deal of character to an otherwise bland figure. He comes with a practice dummy. The packaging show it is a more realistic rubber/flesh color but the final product is a boring gray. All in all it's a nice figure, better than it could have been but still not exceptionally exciting. 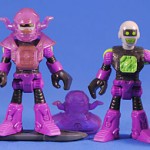 At first I thought this was an "Evil" Robot, a sort of malevolent counterpoint to the Robot from Series 1 but once in hand, I mean come on... look at that face - he's such a sweetie! I like the coloring of him and the green chest square made me think this was a defunct Metallo figure, but the sculpt is definitely more gear like than rock/Kryptonite-y. The use of green plastic for the central hinge in the shoulders is kind of an odd choice but it matches and helps further expand on the green chest and eyes. His removable armor is pretty neat and even though it's cast in translucent purple there is a subtle red or orange spray on the front giving an interesting, if not odd, accent. The real fun, though, comes with his accessory - a rocket-surfboard! The sculpt is fantastic and the uniform nature of Imaginext feet/pegs means anyone can comfortably ride it! I'll probably repaint one of them to highlight the sculpted flame exhaust. I dig this figure more than I expected. His pleasant face is a nice bit of playing-against-expectations, but due to his coloring I'm very tempted to battle-build this guy as a Robot army for Lex Luthor to lead, and an angry face would have made that easier to justify. 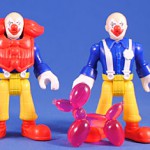 This figure is a bit out of left field, but is equally entertaining. The colors are bright and fun and this may well be the most enjoyable representation of a clown I've seen in ages. The red vest/hair really ties the piece together and makes him litigously close to Bozo (aaaaaw, nostalgia!). Without the hair, there is some kinda creepy about a bald guy in white face and a buttoned shirt without a tie... A red necktie, or something, really would have gone a long way towards making this figure work well without the hairpiece, but such is life. For an accessory he gets a surprisingly cool balloon dog; surprising because it's cast in remarkably effective translucent pink! Altogether this a novel and fun addition to the collection. 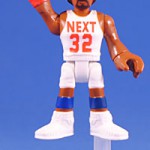 At first glance my "inclusionary sense" was tingling because not only does this series give us two females but also a guy who isn't white! But then... the awkward realizations set in. Of course he has a 'fro. Of course he's a basketball player. Of COURSE he get the most boring accessory and the ball is sculpted on to his hand limiting the play options. So really, politically, this figure can go either way - I'll choose, uncharacteristically, the positive side and say "yay, not a white guy for once." Equality issues aside, this just isn't that great of a figure. The white uniform is boring and the fact that the basketball in sculpted on to the hand is annoying best and figure-ruining at worst. It severely limits your pose/play options, not to mention it'd just be fun to have an Imaginext style basketball so that these figures could "play" against each other. His one accessory is a flight stand of sorts and is a pretty welcome addition to the collection, odds are I'll donate it to Superman, but the plastic used is very lightweight so there is some trial'n'error involved to keep the guy balanced on it. Really, though, the lack of a hoop is very conspicuous, especially since there are no other accessories. Like most blindbagged sports figures this guy is ultimately just too unique/specific to build a team out of nor is he all that compelling in his own right. 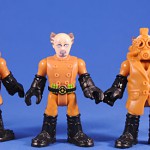 And finally, continuing the trend of two "Monsters" in a series, we get this Mad Scientist. It's a bit brave/bold to have in not in white, but the tan/brown coloring does have a fun vibe to it. He doesn't quite have the olde time-y or timeless vibe I expect from a Mad Scientist or based on the other Monsters; there's something very steampunk-y about his gasmask and atomic about his jumpsuit. The brown coloring and gasmask made me think of Scarecrow so I was hopeful the coat/mask piece would fit on him, but alas the 'crow is too uniquely sculpted to fit this garb. The scientist here has two little tufts of hair but oddly and inexplicably they're painted silver. He also comes with a chemistry set cast as a solid piece in translucent green. It's honestly not that great, or at the least feels "cheap" since plastic fills in what should be gaps between beakers and viles, and that the wooden table is trans-green too. Based on everything else, I just feel like they could have designed something more Imaginext-y in style and proportion that would have worked better. Still though, he's a pretty fun addition to the menagerie.