Evilseed wasn't the only MotU Classics shipment subscribers received this month. We also got the "bonus" subscription-exclusive accessory pack, a bunch of Mo2K-inspired heads for existing figures. "Yay."

There's no question that the 2002 toyline had better designs than the current Classics line. Mo2K was about letting the Four Horsemen run wild with the 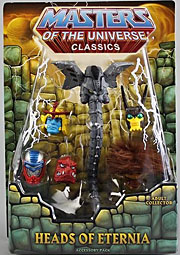 character designs, while MotUC is about making the '80s figures bigger. So while the heads in this pack are almost guaranteed to look superior to what the toys already had, that doesn't instantly make it a worthwhile inclusion. Specifically, because it requires us to have already spent $150 on bad figures in order for it to have any value. "Buy these six $25 figures (plus shipping) in the vague hope that maybe four years from now we'll release alternate heads that make them look moderately more like the better-designed, more artistic ones that we're currently pretending - at the corporate level - never existed!" So yes, this is a nice reward for those of you MotU fans who have bravely soldiered through the entire line, but for those of us who are only coming back now to supplement Mo2K collections, it's a total waste. In fact, it's a total waste that we're paying for the privilege of.

But hey, just because I don't like the idea of something, that doesn't immediately mean it's complete garbage, so let's take a look at these heads. Of course, I don't own any of the bodies they go on, so all these pictures are courtesy FakeEyes22. 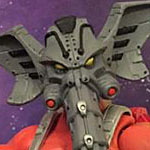 The new head is a perfect duplicate of the Four Horsemen's design, but there was more to their Snout Spout than a head - they redid the entire body, turning a guy wearing red pajamas and a metal bra into a completely bad-ass firefighting robot. So you pop this new head on the MotuC body, and you've got... a really detailed head on a really smooth body. They don't look like they go together at all. It's like the world's worst Photoshop, except it's staring you right in the face. 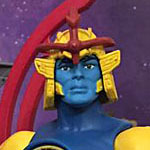 This head isn't vastly different from the original: blue face, yellow helmet, red headband... it's all there on both of them. Obviously there are some more details on the Horsemen's version, like the flares by his eyes or the bits that hug his cheeks, and there's now a crest on his forehead that has a distinctly Asian influence. Still, the face inside that helmet could easily be the same guy, like he just decided to wear something fancier today. This head doesn't look out of place on this body. 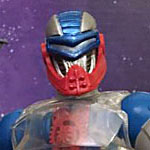 The Vintage Roboto (and therefore, by extension, the Classics version) was basically human-shaped, since his parts needed to be shared with human(oid) characters. The Four Horsemen's Roboto had more distinctive mechano-anatomy. Part of that was a big metal collar that rose up behind the head, which is why a tall, thin head worked for that figure. On this retro chest, it doesn't quite blend in seamlessly. Given enough time, you could probably grow used to the look. 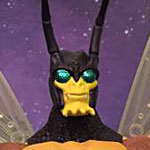 This one's kind of a push. The dumb '80s bee head works, because it's on a dumb '80s bee body. The thinner, more detailed head was great in 2003, when it was attached to a vastly more insectoid frame. But you've got stripes, you've got wings... there isn't really anything that says this head doesn't belong on this body now, and it's definitely got a better design. Sadly, he does not come with his own version of the "eye cap," to complete the full presentation (and the MotUC one won't fit him). 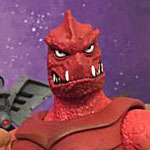 Here's the real loser of the set. Given fee rein, the Four Horsemen turned Clawful into a hulking brute who was more crab than man, but the change was mostly to his body - his head wasn't very different. Pointy nose, pointy head, big fangs... the only significant difference was that his large eyes were beneath a ridge rather than bushy black Muppet eyebrows. This is a minor change at best, and since he's still got the same unimpressive body below the neck, what made the 2005 design so great is entirely absent here. 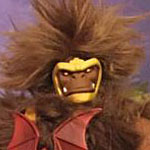 Ladies and gentlemen, our winner! There isn't really a lot of difference to be had when both versions of the character are covered in thick brown fur, so the head (or more accurately "the face," since the MotUC toy was designed to have swappable faces, even though a dose of glue removed that feature from the final product) is what makes the difference between the '00s and the '10s. Factor in the removable loincloth, and you have a total era conversion! This change is so good, it makes me wish I had a Grizzlor to use it on.

So that is the "Heads of Eternia" subscriber-exclusive accessory pack. If you have the figures these go on, they're (mostly) nice additions; but if you don't, Mattel just charged you money for something you'll never use.