Beatrix Kiddo, aka Black Mamba. Vernita Green, aka Copperhead. Budd, aka Sidewinder. Elle Driver, aka California Mountain Snake. Along with O-Ren Ishii, aka Cottonmouth - these four killers made up the Deadly Viper Assassination Squad. Commanded by the Snake Charmer, Bill, the Vipers turned on Beatrix and left her for dead. After years in a coma, she will have vengeance on her old comrades. 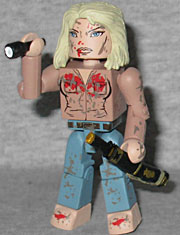 Beatrix is wearing her desert outfit: a brown shirt and blue jeans, and because this is a Tarantino movie, no shoes. She has the same hair as The Bride, and there are splotches of brown and red all over her - dirt and blood, of course, suggesting that this Minimate represents her after One-Inch-Punching her way out of the lonely grave of Paula Schultz. Both feet have identical paint apps, which would normally be fine, but in this case only one side of her foot has any dirt on it: the outside of the right foot, but the inside of the left. She's got a flashlight, because Budd is considerate, and her sword. The opening in the scabbard is still on the wrong end, and at this point, it seems unlikely that they're ever going to fix it.

Vernita Green, the best lady Bill had ever seen with an edged weapon, 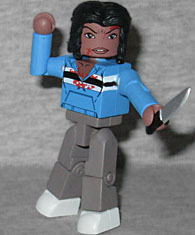 left the life of an assassin behind and became Jeannie Bell. She's wearing her mom clothes: a hooded blue sweatshirt with black and white stripes across the chest. Her pants are just grey, because reproducing the stripes on the ones she wore in the movie would have cost a lot without adding any real design value to the toy. There's blood splattered on her chest, and a little bit on her face. The hair doesn't seem to have quite the right shape - it should be wider than it is at the bottom. She's armed with her butcher's knife, of course. It was either that, or a box of Kaboom cereal that would fit over her hand and have a bullet hole in the bottom. Actually, that does sound pretty cool!

Bill's brother Budd was the only member of the Deadly Viper 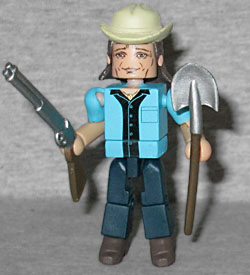 Assassination Squad to actually defeat The Bride; sure, he did it by subterfuge, and not in a straight-up fight, but the fact remains. This figure comes with both a shotgun (filled with rock salt) and a shovel, but he's not wearing the outfit that goes along with either of those accessories. This outfit, with his off-white cowboy hat, dark jeans, and blue-and-black bowling shirt, is what he wore when he went to work at the My Oh My strip club. His hair and hat are a single piece, and his boots of course come from Wolverine. There's a gold necklace painted on his chest, and although the blue of his shirt cuts off the pink skin before it reaches his neck, the entire torso is molded in pink, so you could fix that yourself easily. 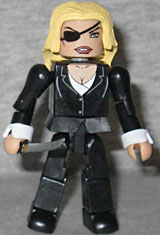 Elle Driver is wearing her black suit, with extra pieces to create the lower edge of the jacket and the floppy white ends of her shirt sleeves. She's armed with her own Hanzo sword, but gets no scabbard. It would have been cool if she came with the suitcase of money she used to buy Beatrix's sword, but this is the only Minimate suitcase there is. And actually, if Elle has the Beatrix's sword, shouldn't Beatrix have Budd's? Considering how small they are, it's not like there would be a huge difference between them anyway. Her suit is simple, with just enough details to sell the idea that it's three-dimensional. She's painted with her eyepatch and a slight smile on her lips.

There's one more piece in the package, but it's an accessory, not a character. It's the plain wooden box that Budd buried the Bride in. It's 2½" long, 1⅜" wide, and ⅞" tall. The lid is removable, and the inside is just as detailed as the outside. There's even a Minimate-fist-sized hole in the lid, because Beatrix is punching her way out! That's a fun feature, and definitely more than you'd expect from a Minimate set. 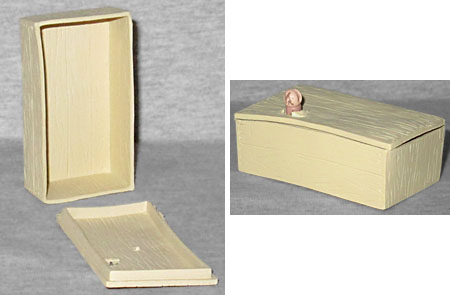 This four-pack sort of jumps all over the movie - the way they're presented, only Beatrix and Elle would be interacting with each other - but it does complete the Deadly Viper Assassination Squad in their most iconic looks, so that's pretty cool. And the inclusion of the coffin is just awesome!