After losing the use of his legs, Charles Xavier began taking 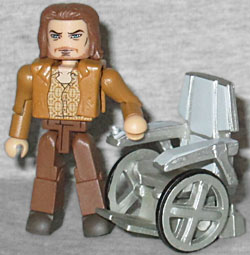 a serum that enabled him to walk, but at the cost of his telepathic ability. When he needs his powers in 1973, he must quit the serum and use a wheelchair.

Chucky's wearing a totally '70s outfit: brown pants, tan jacket, and a shirt with an ornate pattern. In the movie, the shirt was pink and magenta, but here it's brown. Maybe that was a choice Art Asylum made to save money, or maybe they were given the wrong colors to work from. The likeness doesn't really look much like James McAvoy, but it doesn't not look like him, either. He's got long hair and a scraggly beard, and some bags under his eyes from not getting enough sleep. The wheelchair is a new piece, detailed just like we saw in the movie. 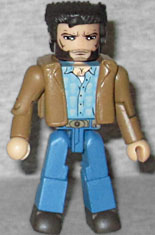 Projecting his mind back to 1973, Wolverine must take control of his younger body and re-unite the X-Men to stop Mystique from causing a horrific future where humans and mutants are both endangered.

Logan's look is a bit more timeless than Xavier's: while he's still wearing a brown leather jacket, he's also gone with blue jeans over corduroy. The shirt has a retro pattern, but those come and go anyway. This may be the 52nd Wolverine, but he doesn't seem too specifically tied only to the movie. 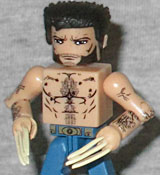 Since Wolverine found himself buck naked when he got to 1973, this figure comes with an alternate bare chest - sorry ladies, he's still got his pants on. He's painted with visible veins on his arms, to match how vascular Hugh Jackman was looking, and they even included the seven bullet wounds on his chest (which, contrary to what the IMDB trivia section may have told you, are not arranged in the shape of the Big Dipper in honor of Fist of the North Star). And naturally, the set includes hands both with and without his bone claws popped.