Since our review today is Masters of the Universe, we figured a little bit of Marvel wouldn't go wrong on the blog.

Although the Tyrannosaurus Rex looked quite threatening, it could hardly use its front legs armed with just two claws since 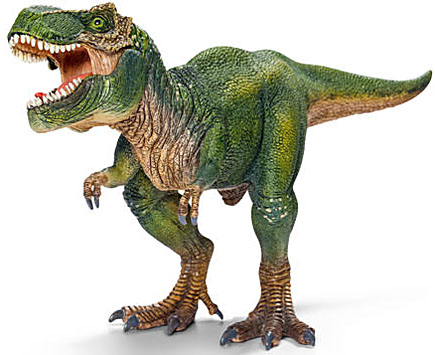 they did not even reach his mouth. Nearly seven metres tall and thirteen metres long, the Tyrannosaurus Rex was probably not a very skilled hunter, but rather a scavenger which probably fed on the leavings of other animals. It had more than fifty teeth measuring more than 15 centimetres in length which it used not for chewing but rather for tearing, since it swallowed its food in large chunks. To improve depth-perception when searching for food, the eyes of the Tyrannosaurus Rex were oriented toward the front such that the fields of vision of both eyes overlapped.

We've reviewed some Schleich before, but that was a much 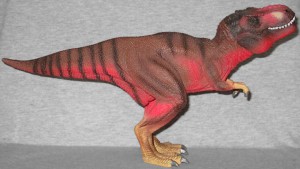 more mundane animal than a T. rex! Rustin swears by the Papo versions, but they're not significantly better than Schleich's. Think NECA and Mezco. The sculpt is just as intricate, but the pose is a bit more reserved - this T rex is just standing, not running or walking. On the plus side, that means he's completely stable. The jaw is articulated, but you'll want to leave it open most of the time - the way he's posed with his head raised looks kind of weird when the mouth is closed. The toy measures 10¾" long and 5½" tall.

The standard T rex is green, as shown in the stock photo at the top of this review - I opted for the Walmart exclusive, which is also why this 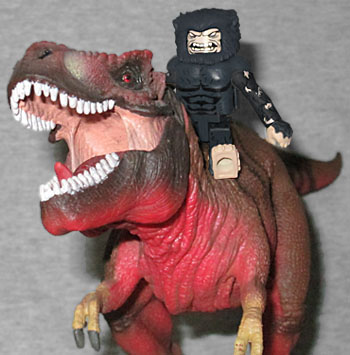 counts as a Marvel review. When you hear "red tyrannosaurus," what do you think of? That's right, Devil Dinosaur! The Jack Kirby creation from an alternate dimension who's been part of an X-Men team, has lived in the Savage Land, and been a villain for Nextwave. We're unlikely to ever get a real Devil Dinosaur toy, so this is a good stand-in. The belly is the brightest red, with a ruddy brown over the back and a dozen thin black stripes. The hands and feet are yellow with grey claws, and there's a spot of green right by the nose. The skin inside those ridges around the eyesockets is black, providing a nice contrast for the red eyes. The inside of the mouth is pink, and the tongue is bright red. It's lovely!

In my dream world, Diamond Select would take advantage of the new Devil Dinosaur series to release a Devil Dinosaur vinyl bank, then do a Moon Boy Minimate who could ride on his back. That seems unlikely, though, so for now this is a decent stand-in.