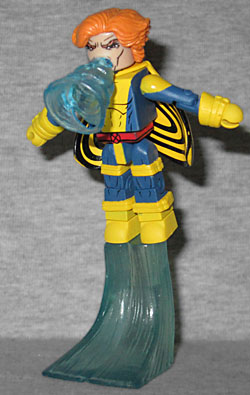 and allows him to fly, and stands with the the X-Men whenever he is needed.

Banshee got his blue-and-yellow costume sooner than the rest of the team, picking it up on Muir Island in Uncanny X-Men #255 when the Reavers attacked. He and Forge also kept this as their "standard" uniform long after most of the other X-Men moved on to other things. The Minimate gets his wings thanks to Monica Rambeau's cape, and the stripes are painted excellently. His face is painted mid-scream, and he has an orange hair piece that would be perfect for Arcade, if AA wanted to make him. The set includes a two-footed flight stand, but what's really cool is the "scream" effect: it's the same basic mold as the whirlwind '80s Storm had, but there's a ring to attach it to his neck post, allowing it to rest directly in front of his mouth. You can literally look up the cone of sound and see his teeth and tongue. Seriously brilliant! No toy of Banshee has ever done anything like that before!

A pyrokinetic, Saint-John Allerdyce can control fire, but not create it, which is why he has a flame thrower on each arm. A member of the Brotherhood, 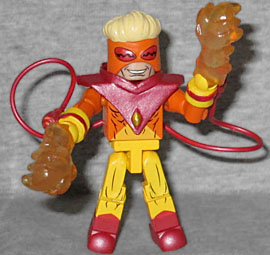 he later served the government as part of Freedom Force.

Yes he did! All of Mystique's Brotherhood did. What they didn't do was ever interact with the X-Men while the heroes were wearing the blue and yellow costumes, meaning that this series doesn't represent any specific story, it's just an excuse to release a bunch of new characters (and we're all for it). All Pyro's pieces are new: new mask, with hair sticking out the top; new triangular chest cap with a diamond on the front and a pack on the back; new gloves, connected to the backpack by tubes and featuring flamethrowers on the wrists; and new flame pieces that he holds in his hands to look like they're coming out of the tubes. This is a really well done Minimate! They probably could have gotten away with just painting his mask on, since there's no hair to replace it if you take it off.

Series 60 had a gimmick where most of the sets came with extra pieces to allow you to change one X-Man into another - in this case, bonus parts turn Banshee into the matter charging Cajun, Gambit. 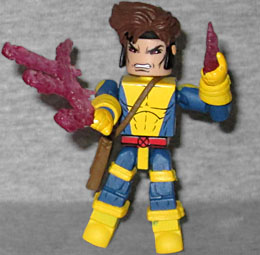 Gambit, unsurprisingly, uses many of the same pieces as the first Gambit Minimate - namely, the hair and the card hands. How ridiculous is it that he wore his head-sock with the X-uniform? Sometimes he even wore his trenchcoat with it, but if you want to do that, you'll have to borrow it from a different Minimate. There's no bo staff, but he does have a brown satchel to sling over his shoulder. Surprisingly, no stubble; nice of him to shave for his first meeting with Professor X.