The Vitruvian HACKS (Highly Articulated Character Kit System) Kickstarter toys are starting to arrive, and we'll soon be reviewing them. Since the males are all built on one basic body, it makes sense to just review it now and refer to this as needed. Fortunately, the first shipment of figures included two "blanks" - plain figures, molded in a solid color and packaged in a simple bag with a selection of extra parts. 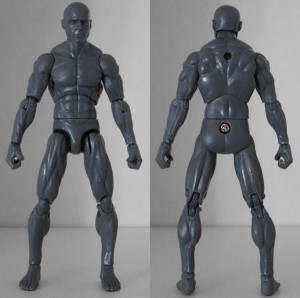 The body stands approximately 4" tall - it may be a skosh taller or shorter, depending on how you have it posed or which accessories you're using at the time. As you can see, it has a very muscular sculpt, suitable either for a bare body or a superhero's costume. The front is more detailed than the back, because there's simply more detail to be put on the front of a sculpted body than the rear. The only flaw, if you want to call it that, is the large screw at the base of the spine, holding the two halves of the hips together. At least the hole between the shoulder blades is intended to hold backpacks and such, not just a production artifact.

the bald head that's attached in the bag, but also a smooth masked head with no facial features other than the eyes; a "black" head, for lack of a better term, with curly hair and a broad nose; and a "white" head with hair that's somewhat like a shaggy Caesar cut. The heads are mounted on double-balljoints and swap easily. Which is especially surprising, since even larger companies have trouble making that work right.

The height difference mentioned before can be attributed to the feet, because the blank comes with three pairs: a pair that's bare, with all the attendant veins

and tendons visible in them; a pair that's wearing sandals, because the first series of HACKS is all about ancient Greece; and a smooth, featureless pair that are, again, perfect for superheroes. These also pull out with no major difficulty, as do the two sets of hands: one with the hinge joint running horizontally, and one with the joint running vertically. To help keep the figure standing, we also get a Boss Fight Studio display base, and there are peg-holes in all the feet. 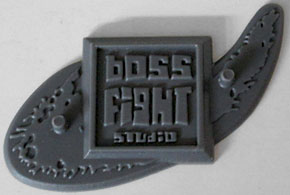 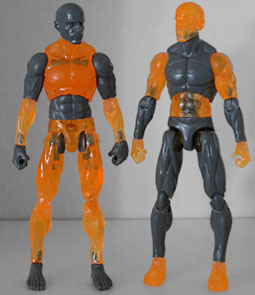 As mentioned, the initial shipment of figures included two blanks - since they're different colors ("Shadow Gray" and translucent "Fire Orange"), this affords us the opportunity to show off how modular the Character Kit System really is. As seen in the photo, the parts pop out and in quite easily, with no major hassle. The heads, upper arms, hands, abdomens, groin and legs have all been traded between the figures. You could probably exchange the knees, as well, but that would require pushing out the pins - not something that's terribly hard to do, but this is just meant to show off how versatile the figures are straight out of the package with no extra tools.

Some of the articulation is surprising.

Rather than just having the leg fit onto a balljoint, like Hasbro's Marvel Universe figures do, this is a two-piece assembly. However, it's not two halves of a thigh screwed together, like GI Joe; rather, there's a small piece that fits onto the hip ball, and then extends down into a cavity in the upper leg. Meanwhile, a small stud on the interior of the upper leg provides the friction needed to hold the balljoint in position. This is a complex design!

The chest joint is a ball-and-socket that connects directly to the waist - the figure's abs are a separate piece of plastic that just fits around the assembly like a sleeve.