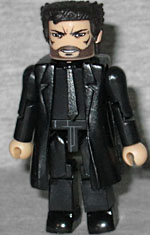 Wolverine is the best there is at what he does, and what he does isn't very nice. Gifted with an accelerated healing factor, superhuman senses and a long lifespan, he has been alive for over 150 years.

Wolverine #48 joins Yukio and Viper in the funeral scene, because nothing says "fun toy" like the death of a decrepit old man. In Logan's defense, this could also be called "Train Fight Wolverine," so that's pretty cool. He has clawed and unclawed hands, of course, plus a jacket and necktie in black. In fact, his only paint is the zipper on his pants. 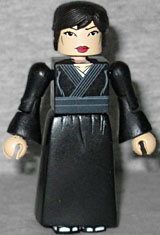 Mariko is the daughter of Tokyo crime boss Shingen Yashida, as well as the granddaughter of the elder Yashida, whose life Wolverine saved in World War II.

Yukio looks like a photo negative of O-Ren Ishii - she has the same dress and same sleeves, just in black instead of white. She even parts her hair on the opposite side! Speaking of the hair, it's designed weirdly: it looks like the way Tao Okamoto wears her hair in the movie, but her left ear is lower on her head than her right ear. Like, substantially lower. Low enough that it's worth mentioning when we review her. Sadly, she does not come with the knife seen in the posters. Still better than the last Mariko, though.