Boromir doesn't get enough credit. Yes, he wanted to 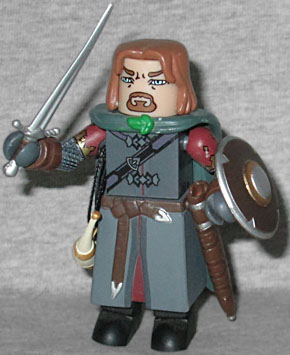 take the One Ring back to Gondor, which was the wrong choice, but he didn't know that. And Frodo found him threatening, but the only other person who got so close to falling under the ring's influence and yet manage to resist it was Galadriel.

Sean Bean's face seems well suited for the Minimate style - better than Aragorn, at any rate. He gets new hair, and his Fellowship cloak. The details on his arms and chest are just accomplished through paint, while his skirt and bracers are add-on bits. As if that weren't enough, he also has a bunch of accessories: a shield with raised 3D elements, his sword and scabbard, and the Horn of Gondor! He can only use the shield if you take the bracer off, but it would be years before Art Asylum figured out a way around that with Captain America. 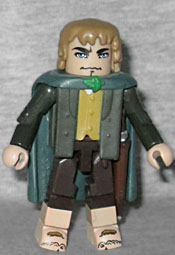 got to know the dwarves well enough to tell them apart. And while that's a fair statement, the same can be said about Merry and Pippin - it wasn't until they got split up in the third movie that they got even minorly distinct. Merry is... the one who was on Lost? Yeah, I think that's right.

Anyway, since Merry is a Hobbit, he doesn't get the larger 2½" body that was created for this line, he sticks with the classic little version we're most familiar with. His coat and cape are one piece, as are his hair and ears. There's hair (and toes!) painted on his feet, and a fairly good likeness on his face. He's armed with his sword, and its scabbard plugs into the left side of his waist. The set also includes a bedroll, which could theoretically belong to either figure, since it doesn't fit very well on either of them.