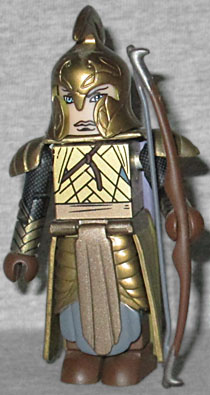 Elrond was not the only Lord of the Rings Minimates exclusive that Action Figure Xpress offered - they also had this set of Prologue Elves.

Both elves wear the same armor, and it's made from the same pieces as Elrond's: foliaceous shoulder armor attached to a big cape, and a skirt with a hinged front so the legs can still move a bit. The details on the arms and chest are just painted on, but they do get a new helmet with a raised crest over the top and etched-in swirling patterns.

The armor is completely gold, 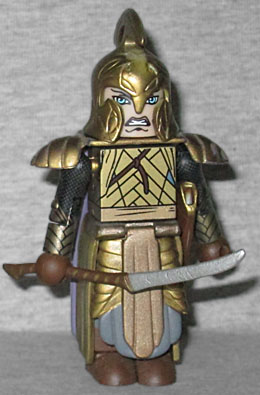 while the clothes worn under it are brown. The skirt in the front is grey, and the cape is closer to purple. The face is painted with strong cheekbones, bright blue eyes, and the weirdest fish lips ever. Both elves get their own expression: the archer is calm, but the swordsman is angry enough to be showing his teeth.

You can tell which elf is which by their accessories: one has a longbow and a quiver attached to the back of his cape, the other has one of those neat elven swords and a scabard that plugs into his left hip. To really create an army, you'd need dozens of this set, but at least you get a little bit of variety if you just buy one. 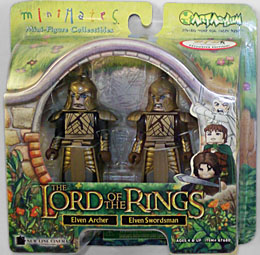 The Lord of the Rings Minimates two-packs were sold on blister cards designed to look like a Hobbit hole. Is everybody visiting Bilbo? The top of the packaging is grassy green, the bottom is done as flowers, and there's a drawing of Gandalf, Frodo and Aragorn on the right side. The style would have changed for Series 3, but that was cancelled before we got a chance to own them.