When the head of the Gotham City Police Department is attacked, Det. Harvey Bullock must take over as Chief, leading the investigation into the reappearance of Dr. Victor Fries, a.k.a. "Mr. Freeze." What does the return of a believed-dead scientist have to do with the new head of Arkham Asylum, Hugo Strange? Meanwhile, with her boyfriend in jail for murder, Dr. Leslie Thompkins chooses to leave Gotham City forever.

HARVEY! We've been getting Jims Gordon since the beginning, 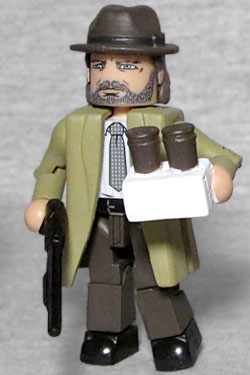 but it took until the Series 4 Box Set for us to get his partner? That's a crime! Bullock is wearing his usual outfit of a rumpled trenchcoat, a loose necktie, and a beat-up fedora. By virtue of being dressed in browns instead of blacks, he's one of the brightest figures in this entire line; yet conversely, he's almost the darkest in this set! Harvey is played by Donal Logue, in his third comicbook role, and the likeness is excellent - they got the stubble, the bleary eyes, everything. You can just hear him complaining about having to be up this early. That's probably why he gets an alternate hand with a box of doughnuts and a couple cups of coffee. We can also assume the included shotgun is meant for him, and the hand holding up the badge. Possibly the silver revolver, too, but that's generic enough it could go to nearly anyone.

At last, we get a real baddie! Gotham was set before the 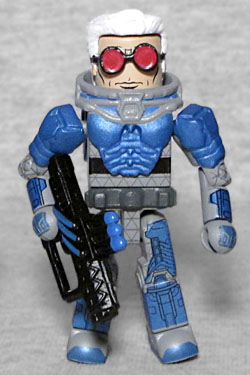 rise of the villains, meaning we saw a whole lot of crazy people doing a whole lot of crazy things, but mostly wearing normalish clothes (and the weirdest wigs in creation). But you can't really do Victor Fries and have him turn into Mr. Freeze without a fancy cryogenic suit. It's fancy blue and grey armor, which is still fairly dark, per the show's aesthetic, but at least is blue and not black. It's like the reverse of the Arkham costume. The chest armor, the belt, and the upper arms are new molds, and the tampos on the torso and legs are incredibly detailed. He doesn't wear a helmet, which really makes you wonder how efficient the tanks on his back have to be, and you have your choice of hair pieces either with or without his red goggles as part of them. And naturally, he's armed with his giant freeze gun. 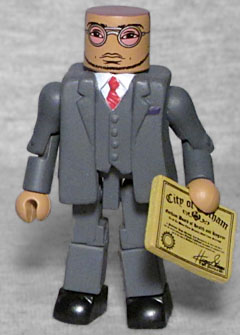 Doctor Strange is a master of the mystic arts. Sorry, I misspoke: mental. Dr. Strange is a master of the mental arts. He's a psychiatrist at Arkham Asylum and oversees the Indian Hill research facility, which is where most of the show's supervillains come from. He's played by BD Wong, who absolutely didn't give a flip - he delightfully chewed up all the scenery every time he appeared on-screen, and really embraced the inherent campiness of the show. He's wearing a dull grey suit with a vest and necktie molded as part of the jacket, and his glasses are painted on his head along with his silly beard and a head full of stubble. The set includes a certificate of sanity ("City of Gotham; Gotham Board of Health and Hygiene; To all To Whom These Presents Shall Come - Greetings; I, Professor Hugo Strange, Chief Psychiatrist, do attest

and swear that the patient undersigned Oswald Cobblepot has passed all mandated tests and by the laws of Gotham City is hereby declared sane.") signed by Hugo, and he could theoretically use either of the guns, though they hardly seem his style.

Eventually he dressed more like his comic counterpart, wearing a long white lab coat, and this set includes an alternate chest block and a skirt piece so you can re-create that look as well. Classic!

Speaking of lab coats, Lee Thompkins! In the comics, 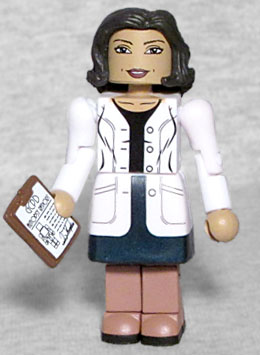 she was the one who took care of Bruce immediately after his parents were killed; on the show, she's a love interest for James Gordon and replaced Edward Nygma as GCPD coroner. She's played by Morena Baccarin, who played Vanessa in Deadpool and voices the Gideon computer system on The Flash, meaning you could theoretically have watched her in three different comicbook roles on a single day and they'd all have been new. Her white coat is a painted element worn over a dark dress. The tampo work is nice, creating all the details of the garment plus wrinkles to make it look like it's being worn. Her legs are a different color than her hands and face, suggesting hose, and the hair is short enough to end just above her collar. Her accessory is a clipboard with a Minimate autopsy report on it.

The fact that this set was coming out is what finally nudged me to pick up the Gotham Series 2 Box Set (would have done the Series 3 set as well, but it's not very impressive). Mr. Freeze may be the most "comicbooky" of the characters in this four-pack, but he's also the least interesting. Hopefully we'll eventually get some better villains in the next set - they could do Ivy, Jerome, Butch, Mad Hatter, Scarecrow, Firefly... and Lucius Fox if they need a good guy to balance it. Or Victor Zsasz if they want someone who looks boring.