Yo said he's not buying Odinson, so this review falls to me!

Crusaders of the realms, these warriors 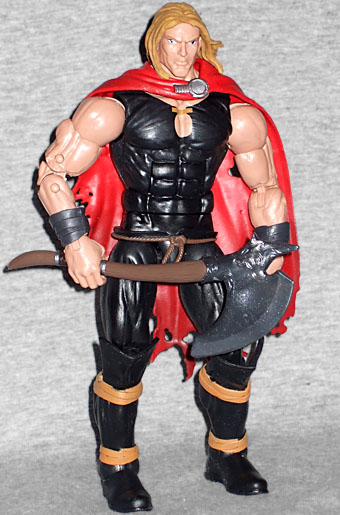 wield ancient weapons in their fight to bring balance to the kingdoms from which they hail.

That bio says "these warriors" because our shabby-looking Odinson is a swap figure with Ares for no clearly discernible reason. Unlike Jane Foster Thor, there are substantial differences between the mass-market Odinson and the one in the Battle for Asgaard SDCC set. Most of the sculpt is the same between the figures, but the paint really sets things apart. This one shows the Odinson shortly after he became un-worthy-fied, before he completely gave in to despair. For one thing, this Odinson is wearing a shirt! Yes, like your deadbeat uncle, when Thor lost his job, he stopped taking care of himself. The shirt is just the existing torso painted black, with a golden clasp painted at the neck. Both his arms are also flesh, rather than having one metal. Enjoy it while you can, Odinson! Also, I hope you're a righty when it comes to "choking the Midgard sepent," or future-you will be in trouble! His cape is all torn up, but it's a brighter red.

The head comes from Sentry, because he has long blonde hair and a strong chin. The actual Sentry release of the mold had blank white eyes, while this one actually gets pupils. Crooked, crooked pupils. 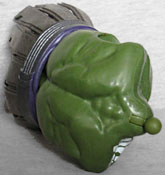 Thor carries Jarnbjørn, his old axe. In the SDCC set, it had a dark handle and light blade, while here it has a light handle and dark blade. But what you really want this toy for the the BAF chest of Gladiator Hulk!

Even if you got the SDCC set, this release of "Marvel's Odinson" is different enough from that one to be worth considering. They look entirely different!