Today I reviewed the Target-exclusive Star Wars Black Series: Luke Skywalker (Jedi Master) - Ahch-To Island figure, and looking at the length of that link, you know why we never bothered to write out the full name of the toy in the review. Anyway, since Ahch-To Island is the home to the porgs, and this is a small set, it seemed like the perfect time for a quick addendum review. 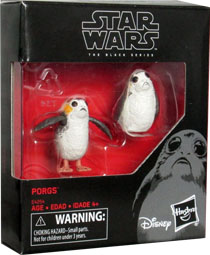 Porgs are sea birds native to whatever world Ahch-To is on. ["Ahch-To" is the planet, the island doesn't get a specific name --ed.] They're fat little puffballs with mouths instead of beaks, and two large black eyes on the front of their heads. They're the cutest things since baby Ewoks, and amazingly, nobody seems to hate them! And the only reason they exist is because of strict environmental laws. 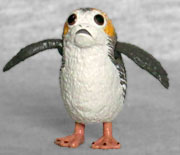 The Ahch-To scenes were filmed on Skellig Michael, in Ireland. Since the '80s, the Skelligs have been a bird sanctuary, a protected nesting ground for puffins. The filmmakers weren't allowed to remove the puffins, so they digitally painted over them, turning them into these adorable little creatures. 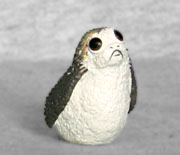 The porgs come in a small, pocket-sized box, designed to match the other Black Series releases. You get two for about $6, which may be a little high, but doesn't feel like a total rip-off. Both are male (you can tell by the orange plumage around their eyes), but you get two different poses: one is settled on the ground, while the other is standing up. The standing one has separate wings, as well, and they're mounted on balljoints so you can have fun posing them.

So far, the porgs only seem to have turned up at Target and GameStop, though they're not exclusives. A lot of people seem to be buying multiples, but I was happy with just one. Even if you're not planning to get Luke and his chunk of Ahch-To, the porgs are cute and made better than you'd expect. 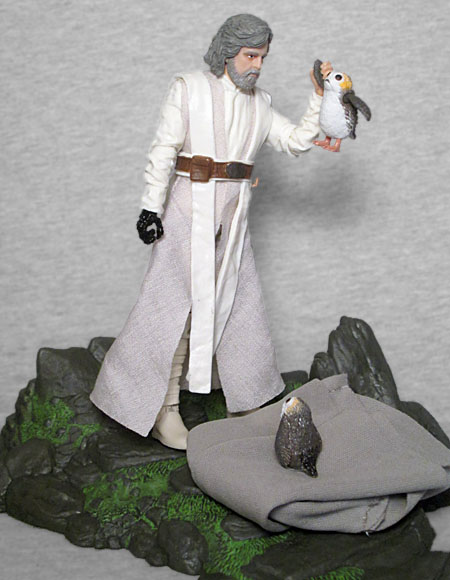