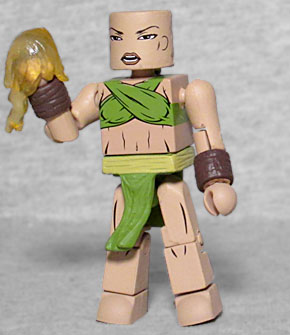 This wielder of the mystical Iron Fist, presumably gained by defeating the dragon Shou-lau, is a formidable martial artist.

Iron Fist 1,000,000 BC is a lady who, thanks to her green clothes and bald head, looks like Moondragon. (Moondragon, if you don't know, is a bald lady with green clothes.) Her top is simply painted on, while her loincloth is the one seen on Elektra - while the other Ancient Avengers are wearing furs, she's got cloth, so that makes sense. She comes with trans yellow fire effects for her hands (making the Black Panther/Starbrand set the only one in this series to not include them), and her head is a new mold, with a socket for her long black braid to plug into.

Odin Borson, father of Thor and All-Father of Asgaard, 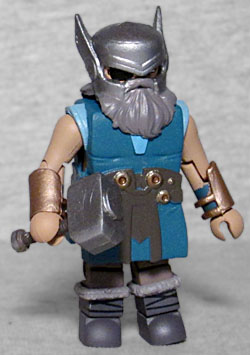 once joined other heroes to defend Midgaard, of Earth, from the Celestial threat called the Fallen.

Putting Odin on this team was a sharp idea: even if the "1,000,000 BC" date is potentially inaccurate, he's immortal, and so would have an excuse to have been around then. He's not exactly "young," as evidenced by the fact that his big beard is already fairly grey, but neither is he the old Odin we'd know in the future. He's already sacrificed his eye (you can just make out the dark patch between his helmet and mustache) and forged Mjolnir, but this is still a guy who's out there looking for action. His blue tunic is a single molded piece that fits over the torso, but you can remove it to expose his bare chest beneath. You can even see what he'd look like clean-shaven, if you want! You may need to reposition the gold armor on his forearms, to keep it from getting in the way of his elbows.