Today's new review was Marian, another of the human figures in Zombie Lab Wave 1. She's also one of the figures to have a Kickstarter exclusive. 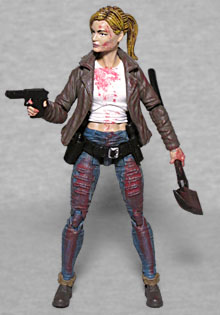 The exclusive's sculpt is unchanged from the normal release: the same leather jacket, the same belly-baring tight T-shirt, and the same overpriced designer jeans. She's even still got the little pieces around her ankles that serve as the top of her boots. The head is the existing mold as well, so don't expect a change in hairstyle or expression. The thing that makes this an exclusive is the paint.

Showing Marian after she's been running around the streets for a while killing zombies, This figure is splattered with red blood. It shows up on her chest the best, obviously - red against white makes the strongest contrast - but it's also on her exposed skin and the rest of her clothes. The red over her blue pants ends up looking nearly the same shade 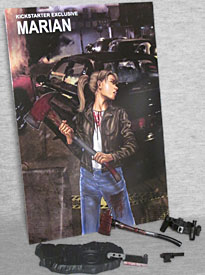 as the jacket, and the jacket itself hides the red unless you've got a strong light on it. But bonus points for including a mess on her back, too.

The figure has the same accessories: a policeman's belt and pistol, a meat cleaver, and a machete. Also the standard display base. She's also got a card that shows the same character art as the regular release, but features a different background behind her and the fourth chapter of the story on the back. Which reveals info about her that wasn't in the first chapter, and shows that the story we made up in the review was way off!