I promise you, we are not trying to hit the Backpack Bunch harder than the other BotBots factions - this will be the third time they've gotten the spotlight, while the majority of the others have yet to make an appearance at all. That's the downside of making the picking process truly random. 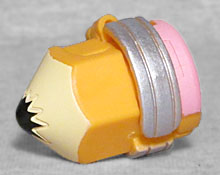 The symbol for the Backpack Bunch is a pencil (well, a pencil wearing a tie and glasses, because haters gonna hate, nerds gonna nerd), so it makes sense that one of the items in that bunch would be a pencil itself. Did you know there could be such a thing as a superdeformed pencil? Apparently there can! Because while real pencils are long and narrow, this one is short and fat, like a novelty pencil that's been sharpened and resharpened down to a nub. 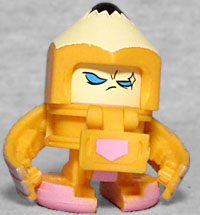 need to draw up a plan. He knows what to do every time. He may be nerdy, but he's always write. Legend has it he's never had to use his eraser.

This may be the best robot mode we've looked at yet - from the front, at least. The side view is a tad plain. Although it's clearly just a pencil that's been hammered into a robot shape, his curvy little arms make him look fierce, and the feet look like actual flappy things on the ends of legs. There's a pink patch on the chest flap that looks like a pocket, almost, and his face is very angry. 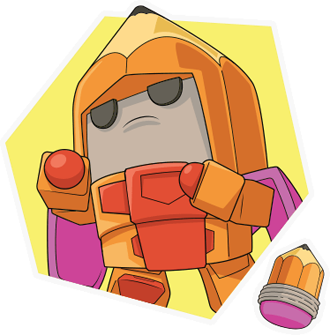