Remember when McFarlane Toys was the first company to hit on the idea of doing Walgreens exclusives, way before Funko or Hasbro or DST or Mattel decided to get in on the action? Well it's been a while, but they're at it again.

As mentioned in today's Skull Trooper review, the skin was originally available for sale around Halloween in 2017, pretty soon after the game had launched. And then it was gone. Fortnite cycles its outfits in and out of the shop pretty regularly, so the Trooper returned in time for Halloween 2018. However, there was a change: in addition to the plain white bones seen the year before, this new version had an alternate style that saw the bones recolored; when they were in the light, they still looked white, but whenever they were in shadow, they appeared to be a light green; and thus, McToys and Walgreens are offering an exclusive "Green Glow" Skull Trooper.

Sure enough, the bones on this toy glow in the dark. The ones on the body are painted on, while the head is molded from GitD plastic - so naturally, that glows much more brilliantly than the body does. An unavoidable issue, unless they were going to pull a David S. Pumpkins and mold the entire toy from the stuff, then waste a ton of money painting over it so you can't even tell it glows at all.

Even when the lights are on, it's easy to tell the standard Skull Trooper from the Green Glow version. Though it's a small change, the hood this version is wearing is black, rather than white, making the face stand out more. I thought this was just a choice made for glow purposes, 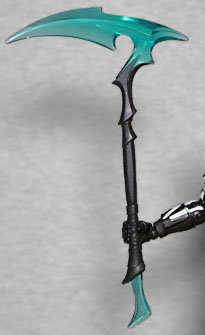 but nope, that's precisely the way the Green Glow Skull Trooper looks in the game, too.

The exclusive does not come with the same accessories as the standard release. Or even as many. All he gets is the Fortnite figure stand, and a single Harvesting Tool. But appropriately, it's the Skull Sickle, the piece that comes in the same "Skull Squad" set the Skull Trooper skin belongs to. It's a neat piece, with a wicked design of curves and angles. It's been molded from translucent teal-blue plastic, then the handle's been painted black. In the game, it's surrounded by spectral energy, but there's no way to make ethereal fog swirl around a toy; the blue color will suffice. 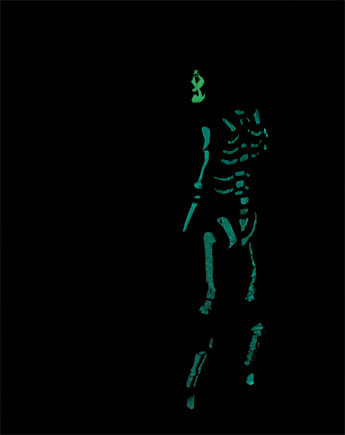 Naturally, the variant has the same articulation as the mass figure, so they can dance or fight or whatever together - head, neck, shoulders, biceps, elbows, wrists, chest, waist, hips, thighs, knees, ankles, and toes. But since there are fewer accessories, the packaging is smaller; while the normal figure is sold in a light blue box with a yellow background, this one is minty green with a maroon insert. And Walgreens apparently really believes in this release, because it gets its own freestanding display in the aisle. How about that!

Getting a glow-in-the-dark figure is more fun than a plain one, but the fact that both versions are, in their own ways, game-accurate makes them even better.

This entry was posted in blog exclusive review, McFarlane and tagged Fortnite, GitD. Bookmark the permalink.